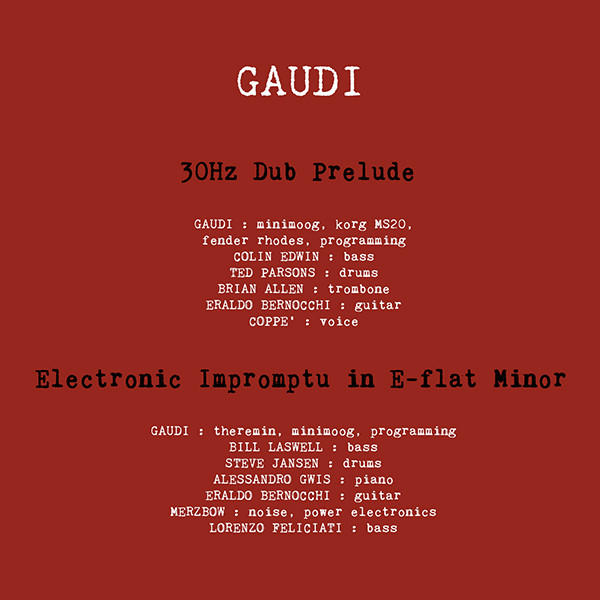 This release by Gaudi is a perfect auxiliary to the RareNoise catalog — the music consists of tracks from the label’s vaults mixed and matched by the producer into a coherent pair of pieces. The spirit is closer to dub than dancefloor, with spaced-out grooves and trippy effects. The personnel credits probably could lead a curious listener to identify the original sources, but I’m not interested in that game. I’ll just say the result is marvellous, and entirely in keeping with the RareNoise esthetic, being a seamless blend of jazz and electronic music. “30Hz Dub Prelude” is somewhat more energetic, featuring a Colin Edwin bass part and drums from Ted Parsons, leading me to think of Metallic Taste of Blood — and here I said I wasn’t going to play the origins game. This is topped by bits of trombone, guitar, and voice; Gaudi himself adds keyboards and synthesizers. “Electronic Impromptu in E-Flat Minor” tends more toward the moody side, with eerie noises (some credited to Merzbow, making this the mellowest thing I’ve ever heard him on), Steve Jansen’s drums, and both Bill Laswell and Lorenzo Feliciati listed on bass. One of the recurring motifs in the piece is a pulsing synthesizer part slightly reminiscent of classic Tangerine Dream. This whole project is fascinating, a glimpse into the future of sonic collage as art form… with a groove.