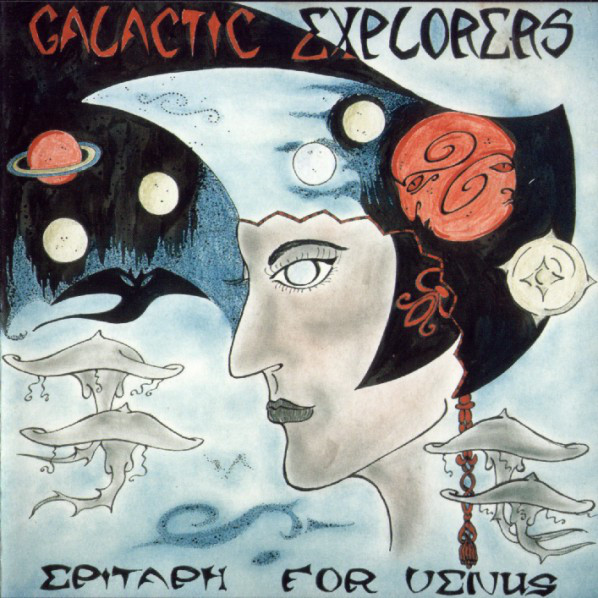 Guerssen has reissued another 70s Krautrock obscurity on their Mental Experience imprint. Epitaph for Venus is one of those mystery albums from the equally obscure Pyramid label produced by Tony Robinson in 1974. For years these Pyramid releases were thought to be fake and crafted much more recently. However, Epitaph for Venus is legitimate. Not much is known about the Galactic Explorers, and they may have only existed long enough to record this one album. The band was Johannes Lütz (Moog and organ), Holst Seisert (synths, electric piano, and effects), and Reihard Karwatky (synths, percussion, and organ). Apparently Reinhard was asked to join in because he and his band Dzyan had recorded Electric Silence about the same time. The album consists of the side-long “Lunarscape,” “Ethereal Jazz,” and “Venus Rising.” The trippy amateur artwork prepares you somewhat for the listening experience of muffled abstract electronic music that was a precursor to cyclic ambient floating music. “Lunarscape” sounds like very early Tangerine Dream with its pulsating, bubbling sequencers. “Ethereal Jazz” continues in this fashion, incorporating Holst’s understated electric piano and Reinhard’s drums, cymbals, and other percussion. This is a simmering piece of electronics at a slow boil that has an aggressive edge. There are a variety of integrated influences from early Pink Floyd cosmic excursions, Tangerine Dream, to Popol Vuh’s Affenstunde and In Den Gärten des Pharaos. The final four minutes mellows out and the music goes in a completely different direction. “Venus Rising” is akin to being next to the quantum drive as the spacecraft hurtles through the ether. Slow electric glissandos and cyclic sonic structures take you on a wonderful cosmic journey. This is one early treasure that is sure to please.

Koniec - Silenci en Bla – Koniec is a Spanish instrumental four-piece of drums, keys, bass and saxes, whose music could best be described as free-jazz-rock, along the same axis as folks like Curlew, Doctor Nerve, and others....  (1994) » Read more