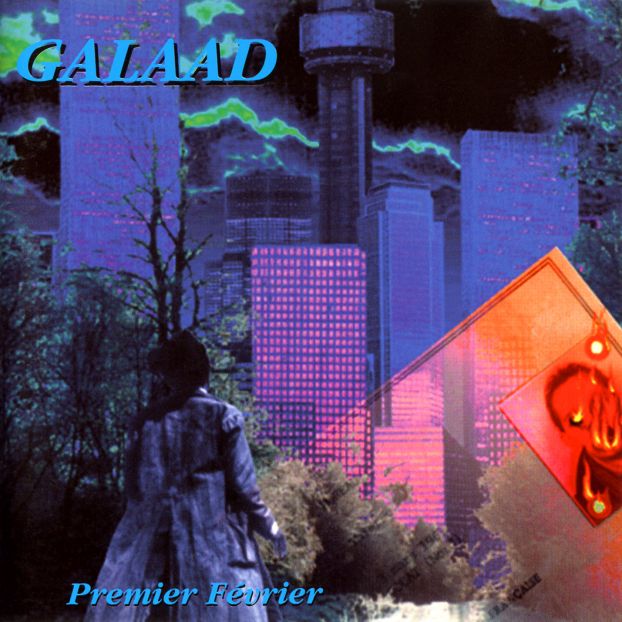 Galaad is another group in the new wave of European neo-progressive bands recording and mixing their debut CD Premier Février between July and September 1992. Galaad is the quintet of Pierre-Yves Theurillat (lyrics and vocals), Gianni Giardiello (synthesizers and piano), Sébastien Froidevaux (electric and acoustic guitars), Gérard Zuber (bass), and Laurent Petermann (drums and percussion). I think that Premier Février is a concept album since their CD booklet contains a seven page story and lyrics, but I cannot read French. Galaad composes and plays intricate melodies employing some enticing techniques. The opening song "Janus" starts with the sounds of birds and someone walking down a busy street eventually leading to a heavy pounding beat and progressive fireworks. "Blasphèmes" initially sounds like a scratchy 78 rpm Galaad recording and then kicks in to full blown chord changes and drums. Theurillat’s lyrics dominate the songs rarely allowing an instrumental break. His dynamic and emotional vocals have the same quality as Peter Hammill. I don’t think you could say he is singing a melody in the “classic” sense. Theurillat is telling a story, as in opera, conveying the message through the emotive quality of his voice. Giardiello’s keyboards and Froidevaux’s guitars supply the elaborate melodic content. It is not until you hear "Votre Mère" and "Sabliere" (the two eleven-minute songs) that Galaad cuts loose and your speakers sizzle with electricity! These two songs offer the broadest range of emotions on the CD full of shifting moods, angry and savage singing, complex rhythms, soaring guitar solos, fantastic Moog synth lead lines, and beautiful pastoral flute and piano duets. Galaad is a band with a unique yet a definite French approach to neo-progressive music. They are a band to watch!