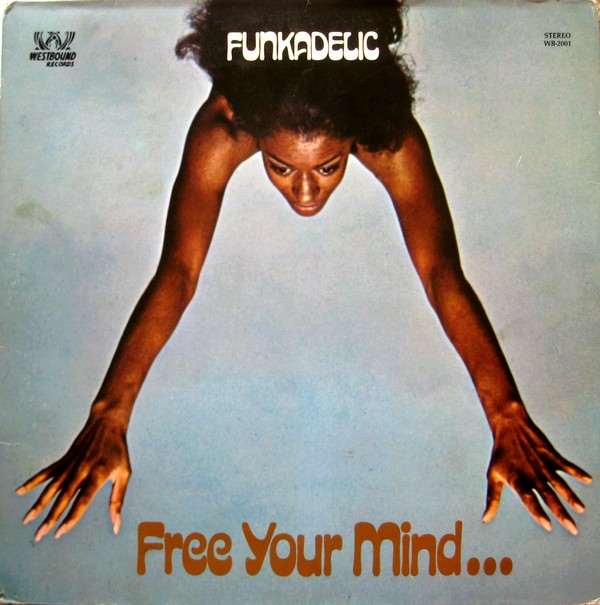 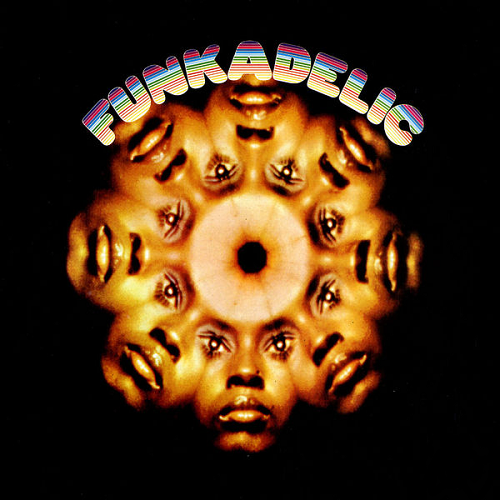 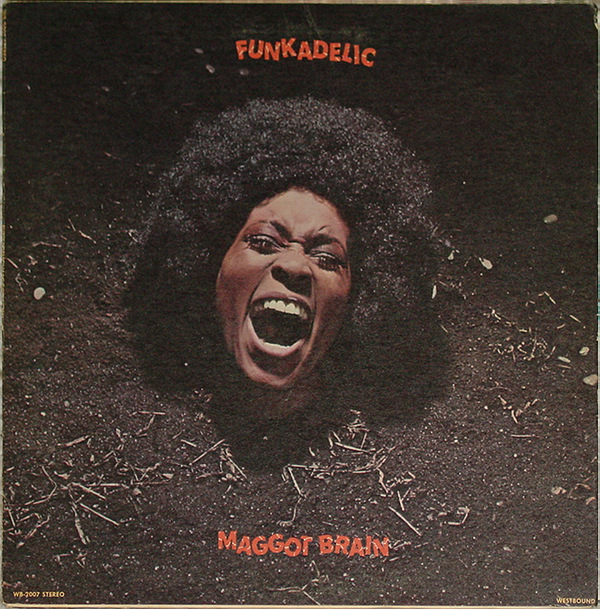 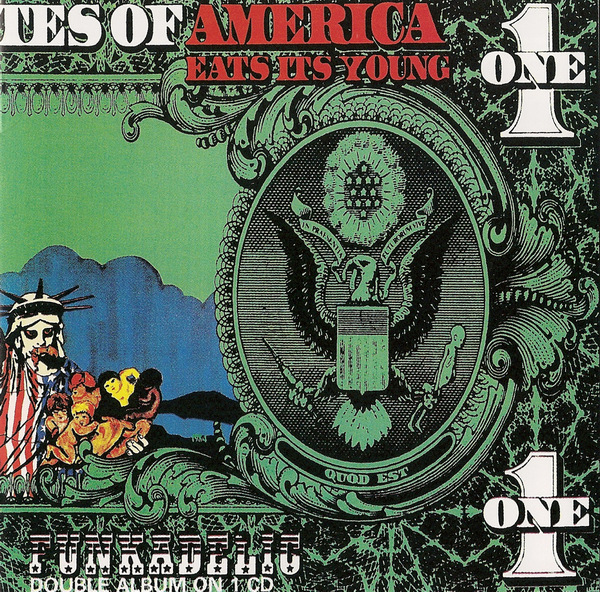 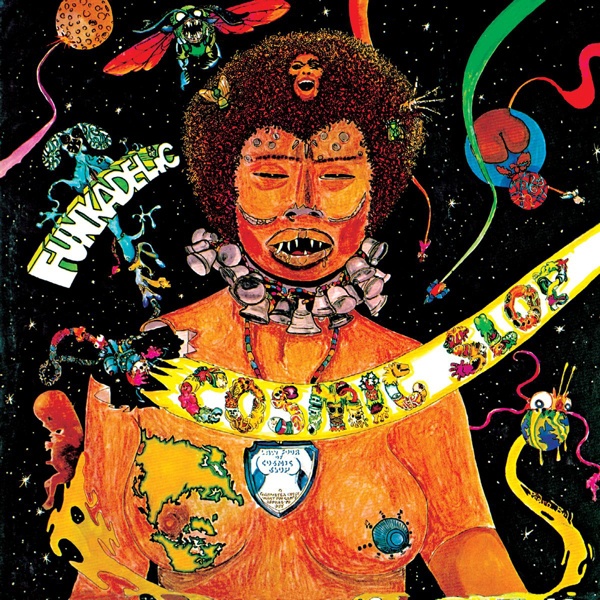 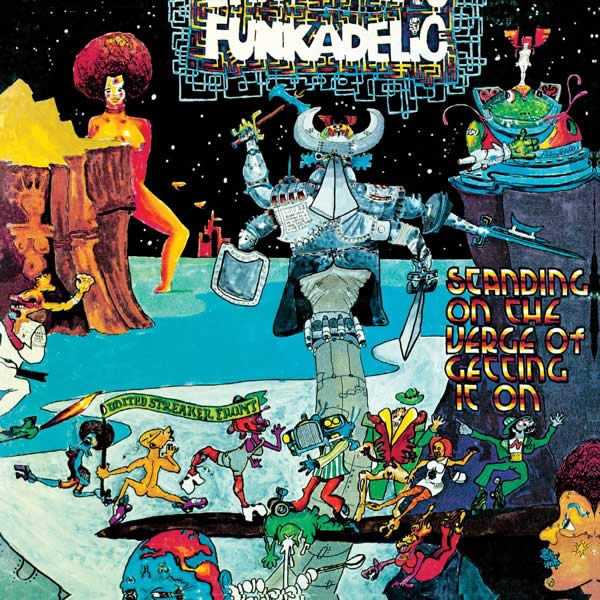 Funkadelic’s self-titled debut album from 1970 shows the band in search of a style. There are still remnants of the 60s soul of their background, essentially expanding a kind of James-Brown-meets-the-Miracles sound with longer instrumental riffing on grooves and less emphasis on a catchy chorus. The tunes are obviously based on jam sessions, and one of them is even a slow blues rather than a funk style. The “adelic” part of the band is clearly in evidence with the trippy echoed spoken word bits and the absurdist vocal riffing (especially on “What Is Soul?” where they answer the titular question with such things as “the ring on your bathtub” and “a joint rolled in toilet paper”). The seven bonus tracks clearly illustrate the R&B beginnings of the band, with some early versions of the album’s tunes as well as uncharacteristically tame pop songs not far from what the Temptations were doing at the time.

The band’s second album, Free Your Mind and Your Ass Will Follow, was released later that same year, and is very similar, with the title cut being ten minutes of funky jamming with goofy words and much playing around with effects devices. The second track ventures more into Jimi Hendrix territory, guitarist Eddie Hazel blazing away with stacks of distortion and a mean wah-wah. The vocalists are less prominent (due to the fact that Parliament was recording an album of their own at the time), leaving Hazel and keyboard man Bernie Worrell to provide most of the highlights of the album, clearly moving them into a spacey, funky kind of rock music more than soul or R&B.

Over the decades since its release, Maggot Brain has grown in stature among critics to be one of the band’s defining statements, and it’s hard to argue with that opinion. In a most unexpected move, the album starts with more than ten minutes of one of the most extraordinary electric guitar solos ever recorded. Eddie Hazel is backed solely by a minimal rhythm guitar part and a bank of effects. The second track throws another curve: while it is funky, it’s backed by acoustic guitar, and features more tightly arranged vocals than usual for this ragged crew. On other tracks, Worrell gets in some great Hammond, and Hazel shines all over the place. One of the bonus tracks is the full band version of the title track (for the album version, the other instruments were mixed out, leaving only the guitars).

America Eats Its Young (originally a double LP) starts out with an oddity called “You Hit the Nail on the Head” which features sections with varying styles: funk in different tempos, blues, and even something like country rock. This kind of variety becomes the defining factor for the album, with horns, strings, and a large crew of different musicians contributing to lush soul ballads, gospel-inflected funk, and psychedelia. Hazel was only around for part of the recording, and Worrell steps up to become the primary instrumental voice. It’s certainly an oddball album, but contains a number of solid gems. It should be noted that Clinton took over production duties starting with this record, and the sound is more polished than on the earlier releases.

Moving along to 1973, Cosmic Slop is a more consistent effort, full of funky, soulful music, in an attempt at commercial success; while it’s less adventurous, it’s more listenable and still has those odd Funkadelic touches, especially in the unusual subject matter of the lyrics and the returning guitar of Eddie Hazel.

Standing on the Verge of Getting It On was the band’s final album on the Westbound label (they debuted on Warner Bros the following year). It’s as slick sounding as its predecessor, but exhibits more of a guitar presence, with Hazel sharing lead duties with Ron Bykowski. Listeners familiar with the later major-label albums might want to start here unless psychedelic goofiness is a big draw.

Funkadelic-Parliament-P-Funk have a lot of great albums but Standing on the Verge of Getting It On is the tops for me. I'd probably only hesitantly recommend the CD recent version because it's clipped on one song, unlike the original LP and CD releases, which is a pretty major oversight on an amazing album. What to say about Funkadelic? They were funky, heavy, psychedelic, funny, cosmic, individual, and everything else but primarily when this group began to lay down a groove there were few better. The lead out song in particular, "Red Hot Momma," is one of the absolute gems of the funk rock movement, with a huge heavy and memorable riff that resonates throughout the whole album. And hey when you get to "Jimmy" one can really hear Zappa in this band too. In rock circles I think Maggot Brain tends to get the nod, especially for all the obvious Hendrix influence, but I think this was the band's most cohesive album. People, what you doing?!