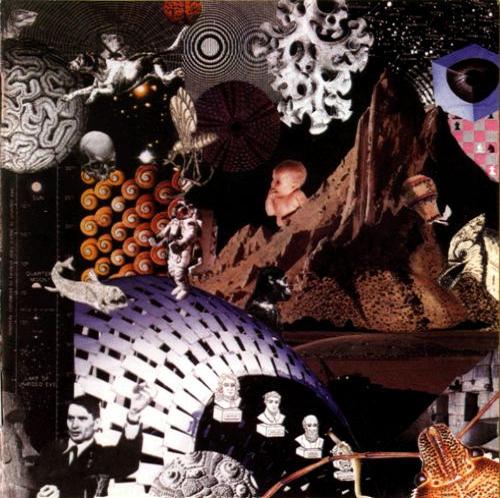 French TV hails from Louisville, KY and has a handful of releases to their name since their inception in the early/mid-80s. Led by bassist Mike Sary, they play an aggressive, complex, and somewhat eclectic type of prog which incorporates elements from a variety of styles including symphonic, fusion, and RIO. The seven tracks on Virtue in Futility cover a lot of musical ground, shifting constantly from one feel or style to another, and showcasing the considerable talent and versatility of the group. Listening to this for the first time, one could easily mistake it for a new Japanese release; it has the same spirit, drive, and attitude as bands like Il Berlione, Ain Soph, and Kenso. There is some great interplay between the guitar, keyboards, and saxophone, all supported by active, powerful bass lines and solid, often busy drumming. The music is full of abrupt time changes and driving riffs which provide a launching pad for some fiery guitar and sax solos. These in turn fade into mellower, more melodic passages, featuring some nice trumpet solos and other guest appearances. There are a few less than spectacular spots on the CD; one track consists of a collage of excerpts from the Iran-Contra hearings mixed with some sound effects and drums, and while it is good for a few listens, it rather quickly becomes one of those tracks you skip over every time you get to it. Another track has a main theme which sounds like it was taken right off of Jethro Tull's Warchild album. The quality of the rest of the music on this CD goes a long way to make up for these blemishes; I just wish there was another track or two of the good stuff. Out of the 55 minutes of music on this disc, roughly 35 minutes are top-notch prog. The whole package is wrapped up by Sary in a delightfully humorous way, featuring entertaining liner notes and song titles like "Hey! Real Executives Jump from the 50th Floor." In all, Virtue in Futility contains some of the better instrumental prog of 1994, and is well worth checking out.

Four years in the making, and no less than seven years after the second album, this latest offering by Louisville's French TV is certainly worth the wait. One unanswered question is why it took from October 1990 until now to release it... I've been hearing rumors of it for at least four years — Wayside would periodically mention it in the 'coming soon' section of their catalog, and rumor had it available on cassette for a while, although nobody could ever produce a copy for me. Well, it's finally here, folks! French TV is bassist/composer Mike Sary, and whoever he happens to be playing with at any point in time. On most tracks, Fenner Castner handles the drum kit, quite impressively, I might add. Artie Bratton handles most guitars, while keyboard duties are shared by Bob Ramsey and Paul Nevitt, and woodwinds are shared by Reid Jahn and Bruce Krohmer. Other musicians fill in on piano, violin, trumpet, etc. Aside from one track, the album is entirely instrumental. The music here is a rich blend of jagged edged rock, Canterbury/RIO, fusion, melodic prog rock, classical, and plenty of humor. In addition, Sary's bass style frequently reminds me of Janik Top (Magma), although played in an entirely different context. Limited comparisons might be made with the rock elements of Djam Karet, the inventive melodics of However's Sudden Dusk or Happy the Man, the complexity of Henry Cow, the busy and multilayered aspects of Zappa's instrumental works, and to a degree, the downtown sound — although most is original enough to defy any instant identification. Tracks like "Real Executives Jump from the 50th Floor," "Slowly I Turn," "Clanghonktweet," and especially the jazz-fueled "Empate," deliver on many different levels. Occasionally it bogs down a bit, but it's always quickly rectified. But no album is perfect. The stinker here is "Friends in High Places," in essence some programmed synth tracks overlaid with tapes of the Iran-Contra hearings and other bits and pieces of Reagan and congress from the same period, in an attempt to make a political statement. Hey, it's old news! This piece would have sounded very appropriate on the second French TV album way back in '87, when all this was happening, but eight years after the fact its power to change things is lost, and now just amounts to kicking a dead horse. Thank god for programmable CD changers. Overall, though, I'd recommend this album highly, Sary has managed to produce an album that effectively bridges many styles, doing it all seamlessly within his very unique musical vision. Hopefully the fourth album won't take so long!

Louisville is as unlikely a place for progressive rock as any, yet that's where bassist Mike Sary's French TV hail from. Its been ten years since their debut album, yet Virtue in Futility (an apt title) is only their third. Seven years on from the last one and not much has changed, French TV still remain a collection of influences from all over the map — Yes, Genesis, Zappa, Brand X, Gong, the Canterbury bands and many more. You'll hear a little bit of everything on this one. As a whole, all these disparate influences seem sort of hodge-podge. At times the music is breathtaking and splendid, at others its stodgy and boring. A fusion track here, melodic "prog rock" here and wait a second — Reagan? Ollie North? Yes, yet another band trying to make a brash political statement! I assume this one was done pretty soon after the second album, as the topic — the Contra scandals — seems a mite outdated. The music underneath does nothing to save it either, a sequenced background with occasional gated sounding orchestral explosions. Personally, I think there's better places for this — I'm sure most would program this out anyway. I think trimming off about 20 minutes from this would have made the overall effect much more impressive, there really is some good music here yet with all the filler it leaves me sort of in the middle. Seven years is far too much time for musicians with the talent of Sary's group to make an album like this. Ten years on and French TV still rate as promising, yet still primed to make a classic. Maybe next time?