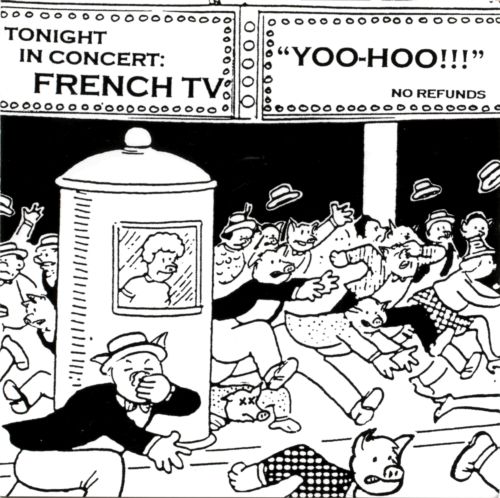 French TV is a real American anachronism: a complex unit (with their unique brand of improvisation) based in the heart of country music land: Louisville. Live they play their own refined style, which isn't much like anybody (except for possibly Gentle Giant circa Acquiring the Taste), and that's great mind you! Plus, they do it LIVE and that's the key conditional word to consider. The album cover says it all: a rabble of pigs running break neck from a movie premiere! What on earth did they encounter, you might ask? French TV don't take themselves too seriously, in fact quite the opposite; flamboyant self parody is the modus operandi of the band. They would like you to listen to their serious work with a grain of salt. Recorded in a small recital hall, you'd think it would be difficult to recreate these elaborate studio pieces without cutting down on studio favorites. But all the pieces are enhanced by a rich chemistry between the players, though they may be under-rehearsed. John Robinson reminds me of Kerry Minnear (Gentle Giant's mastermind arranger and keyboardist) while Dean Zigoris has a jazzy approach to his six string playing. So if you thought these guys were just a studio band, you couldn't be further from the truth. Not bad for a bunch of self-anointed Smurfs, so track this down. It's worth your hard earned dollar and appreciates on replay.