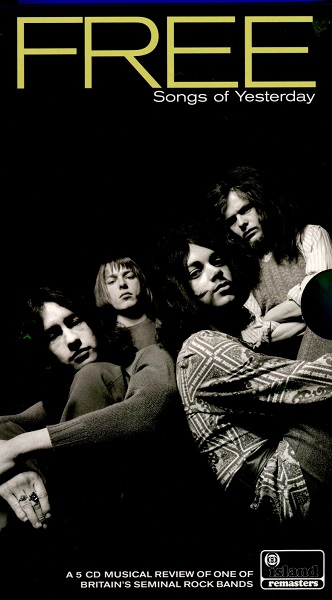 The roots of popular blues based rock and roll are firmly tied to that of Free, a four piece act from the late 60s that had both singer and composer Paul Rogers and drummer Simon Kirke (later of Bad Company fame). Despite the worldwide success of the band's 1970 anthem, "All Right Now," and the instant fame accorded the band, the four piece group could not keep it together to capitalize either musically and financially. This in turn led to an break-up disappointing reunion attempt and final break-up. The late guitarist Paul Kossoff was simply the soul of the band as his empathic leads fed a comparable role to that of Fleetwood Mac's Peter Green. Bassist Andy Fraser was known for his non-standard lines both providing low end propulsion and melodies that complemented Kossoff's riffing. Discs one to three cover studio work done by the group with several outtakes and alternative new mixes from master tapes covering five years. Disc four is mostly a reissue of Free Live dating from 1972 with two additional tracks, a cover popularized by Cream, Robert Johnson's "Crossroads" and "I'll be Creepin'." The minimal but powerful arrangements by the band in a live setting are instantly apparent. One of the best tracks is "Free Me," that emphasizes the group's subtle control of a slow moody blues that later influenced bands such a Lynyrd Skynyrd. Disc five shows the splinter acts songs after the band’s initial split. A rare single by Rodger's three-piece Peace is included as well as several previously unreleased CD samples of Kossoff's efforts and Fraser's band Sharks with Chris Spedding. The real oddity is Rodger's creditable reggae experiment with Maytals, "(I Just Wanna) Make you Smile," that shows how the singer can succeed in a different format to what he was accustomed. The most impressive bonus song of these is an extended jam with guitarist John Martyn that dates from live work in 1974, "Time Spent (Time Away)," that shows Kossoff extending much of his playing power in an open format. The compiled exhaustive liner notes are a personalized and frustrating account from each member of the band as well as from close associates (engineers, managers etc.). The insiders' points of view lend strong credence to the band's unfortunate rise and fall. As a complete history of a much under-appreciated blues rock icon, the boxed set is not only an excellent introduction but essential tome for collectors.