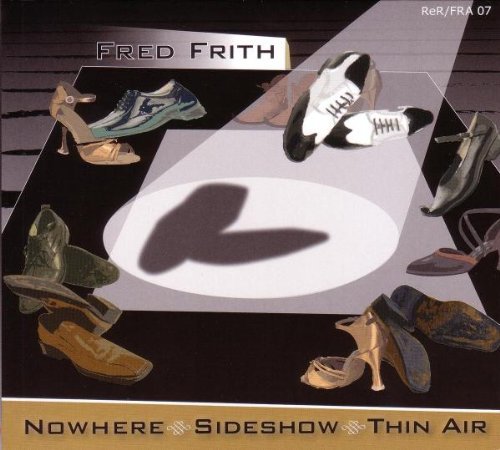 As one might guess from the title, this is a three-in-one – in this case three commissioned dance pieces by three different choreographers (one recent and two a bit older) that coexist together on the same release. The first is Nowhere, for choreographer Paul Selwyn Norton’s production Proxy Trilogy for Korzo Theatre, Den Haag in the Netherlands, which premiered in November 2000. The eight parts, which feature Frith on electric guitar, bass, percussion, keys and samples, with Carla Kihlstedt (Tin Hat Trio, SGM, etc.) on violin, flow together seamlessly and periodically return to a haunting main theme that defines the piece as it evolves. Sideshow is another dance-theater piece dating from 2001 which also features Kihlstedt on violin, Fred Giuliani on samples, and Frith on nearly everything else, including some interesting percussive sounds. This one tends to be more instrumentally sparse and violin-centric, perhaps more melodic as well, featuring some warm conversations between violin and acoustic guitar. Each of the eight parts are discrete and stand-alone. The last of the three is Thin Air, for choreographer Donna Uchizono’s work of the same name, which premiered in NYC in October 2007. This features Hande Erdem on violin, Theresa Wong on cello and Frith on all other instruments, including electronics, samples and radio. Unlike the others, most of Thin Air encompasses what is easily the most sparse and avant-garde music of the three, yet some of the most interesting and enjoyable sounds on the disc are found herewithin.