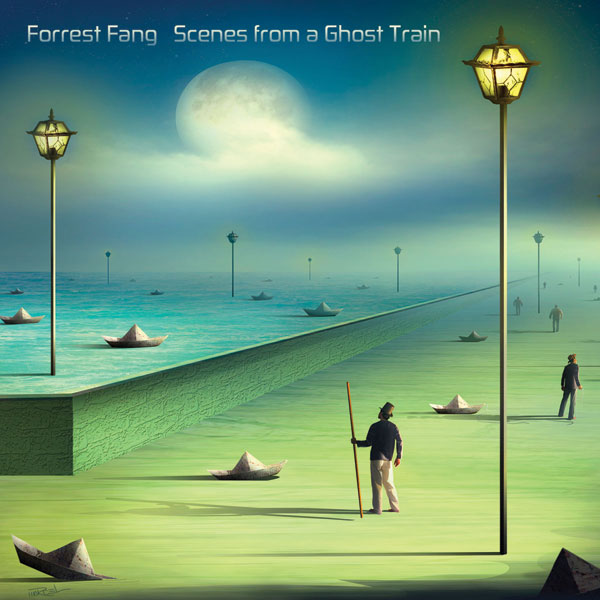 From the blackboard jungle to the waning crescent and beyond, visionary composer Forrest Fang has been honing and perfecting his craft since the early 80s, and if I’m not mistaken Scenes from a Ghost Train is his 16th release. His work is visionary, built upon layers of atmospherics, subtle percussive elements, world instruments, and plenty of sound processing, delays, and loops. Melodies embed themselves within the sonic fabric, and reveal themselves as events at various points, like markers on a journey through haze. Although each successive album is different in its own way, his production methods are unique and instantly recognizable as such, and like The Sleepwalker’s Ocean and Following the Ether Sun before it, Scenes… makes good on the dense layers of atmospherics that offer a floating ambient wash within which all other events shimmer. Opening with the four-part twenty-one minute title suite, Fang intoduces his soundwall as it brims with depth and shimmers with breath, all flowing outward from a stream of consciousness. The second section introduces more melodic elements, almost like the random ringing of bells over a bed of processed world instruments (which may include saron, cántaro, cumbus, kendang, and violin) each revealing itself as the piece proceeds. On the third and fourth sections, Dave Newhouse (ex-Muffins) joins in on various woodwinds, while more prominent percussive elements are brought closer to the fore, along with more evidence of eastern instruments (section four, “The Pulse of the Stars” is built up over a bed of violin and zither or santoor, with Newhouse’s flutes and soprano sax mixing freely with the atmospheres, and bass clarinet revealing itself at the bottom end, bringing the suite to a powerful conclusion. Among the five remaining pieces, “Enfolding” takes the listener on a ten-minute deep space journey that cycles through layers of sound in slow-evolving loops, with elements of the fabric glistening like slow-moving moonlight on a restless lake. “The Great Migration” is another side-long piece that opens with a slightly softer approach, like riding through a pillow of clouds, looping and evolving slowly as it goes, and revealing a vast panoramic soundworld of subtle imagery, with some mysterious percussive elements carrying it forward from the fourteen-minute mark. Overall, the entire disc fits in perfectly with Fang’s visionary style. If you haven't explored his work yet, let this be the starting point.

The thing I notice most about Forrest Fang’s music is that his sounds create a world of their own, seemingly existing within an infinite space of possible sounds, all of which are distinctly his. All of these notes and textures are present in their own places within this world, and the listener, guided by the composer, wanders among them as if exploring a varied landscape. In one area is a pulsing node of string-like sounds phasing through various tonalities; a little way to one side is a chasm from which tinkling bell-like tones emanate; off to another side is a knot of percolating marimba-like notes; up above is a slowly turning globule of sparkling piano notes; off in the distance is another node of strings, this one playing different notes. Like a skilled tour guide with a sense of drama, Fang leads us around this virtual world, approaching one sonic node after another, but never getting so close to any that others are not also audible. There’s a dream-like suspension of time as we pass through space — nothing happens quickly, and whenever we notice a new sound, we realize that it was there before, just below our threshold of focus. In the far distance, we’re dimly aware of still more sounds, but they remain obscure, elements that may show up later in our path, or on our (Fang’s) next journey, or maybe remain from some previous trip. Forrest Fang has a room with a sign on the door: All Sounds Are Yours. And it contains not every sound that is possible, but every sound that he has ever used, or ever will use, or maybe it’s the same thing because time doesn’t function as we expect, at least not in this place. (Apologies to Hermann Hesse for adapting his idea.) No one rides the Ghost Train — we all become ghosts on it, witness to the ghosts of sounds past, present, and future. It is a peaceful journey — the ghosts are not malevolent. Nor are they beneficent — they just are.