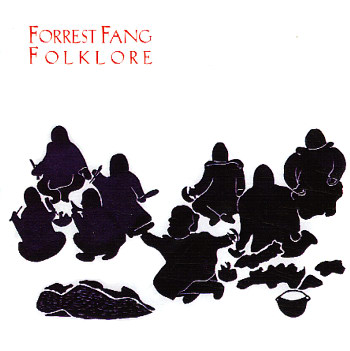 While Fang's earlier material was more firmly based in the electronic and progressive rock genres, his recent recordings have found him delving deeper and deeper into experimentation with various non-Western musics. Most noticeable among these have been various Asian musical traditions, including Chinese, Japanese, Tibetan, and Balinese. However, Fang doesn't limit his tonal palette to strictly Eastern sounds, incorporating Middle Eastern, African, Indian, and South American instruments into his world music stew. Folklore is quite aptly titled, then, for the music on this album is strongly reflective of the folk and classical musical traditions of a variety of cultures. It is obvious that Fang has undertaken some serious study of non-Western musics, as evidenced by the highly idiomatic writing for the diverse array of instruments he employs on this album. Assisted by a variety of Eastern musicians, he effectively captures the essence of these musical traditions in his own compositions. Perhaps one of the most interesting aspects of Folklore, though, is Fang's clever juxtaposition of these various musics, incorporating instruments from one tradition into the style of another, and weaving all these instruments and styles into his own personal musical tapestry. And though this album is primarily based in traditional world musics, Fang's musical past is not completely forgotten; Steve Roach and Robert Rich both contribute some very effective electronic textures which subtly enhance the pieces without disrupting the otherwise acoustic ambiance. The album overall is very effective; Fang creates and maintains a predictably exotic but also a rather mysterious atmosphere, and this sense of mystery increases as the album progresses. On later tracks, strange (to Western ears) vocalizations mingle with the acoustic/electronic instrumental moods, creating some intriguing sonic landscapes. In this regard Folklore is quite reminiscent of some of Mexican composer Jorge Reyes' work, in particular the haunting and evocative album Nierika. Though Folklore may be a bit too much in the world music vein for some progressive music listeners, anyone with an interest in non-Western musics should definitely find this album an enjoyable release.

This is Forrest Fang's first album for Cuneiform, but his sixth overall. Through the years, Fang's music has gradually shifted from a more ambient/electronic music (Eno, Terry Riley) mixed with acoustic instrumentation like violin and mandola, to a something closer to traditional Chinese classical music. Folklore, like the two previous records, employs a multitude of non-western instruments (and in some cases additional musicians to play them), yet these are not applied to the music in stock traditional ways: a track may combine Burmese gongs, Mexican clay drums, balalaika, guzheng (Chinese zither) and a Thai metallophone for example. In short, his original eastern-influenced compositions are arranged for wide ranging instrumentation drawn from many cultures. This is the crux of Fang's style. So what does it sound like? The music here covers a lot of territory, and one might at times be reminded of the work of Robert Rich or Steve Roach (both of whom are featured on one track here), the floating style of Jade Warrior during their Island period, the German band Between, classical and traditional Chinese music, and even some Javanese / Balinese elements. One thing worth noting is that the music features very little keyboard type synthesizers or any amplified western instruments, although certain sounds are obviously produced using samplers. Voices are used on one track, evoking a native-American spirituality. Folklore is above all a cerebral experience, a floating evocation of eastern cultural elements in the framework of western music and technology. Frankly, I think a lot of folks might enjoy this, as long as the expectations are clear. If the quieter, and more culturally diverse elements of progressive music interest you, then by all means check this out.