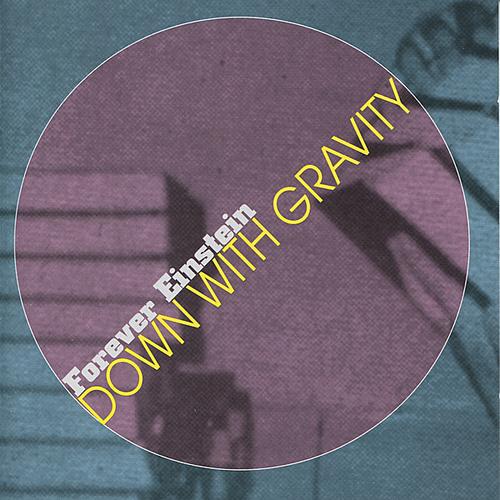 Forever Einstein’s outstanding 1998 release, One Thing After Another was a groundbreaking effort that brought the band to an entirely new plane musically. Down with Gravity consolidates the massive gains of its predecessor while managing to up the ante in the process. Once again the agile trio has combined a bewildering range of approaches into an immediately recognizable, coherent, and original sound. You’ll hear surf guitar to sitar, rockabilly to psychedelia, and influences from Ennio Morricone to Robert Fripp. The band has been accused of cultural plundering in their recycling of styles, themes, and forms, but in reality we are all products of everything that we listen to and hear. As guitarist Chuck Vrtacek puts it, “Our ears are made of Velcro and everything sticks.” On Down with Gravity they stretch the boundaries well beyond anything that they’d attempted in their three previous albums. The 20-minute track entitled “A Fruit Pie Salesman with a Whoopee Cushion Living in Wichita Falls OR Wow! If Your Fly Weren’t Open You’d Look Just Like Roger Moore” is a good example. In contrast with the normally concise Einstein compositions this one is very loosely structured and evolves slowly into an extended bass solo, heavy riffing, wailing guitar, and some delicate acoustic playing. The only track that doesn’t rate two thumbs up is a drum solo that is layered over a professor’s lecture on gravity, but you’ve got to give the lads credit for the effort. Overall this disc is an absolute delight and without a doubt will be one of my top five for the year.