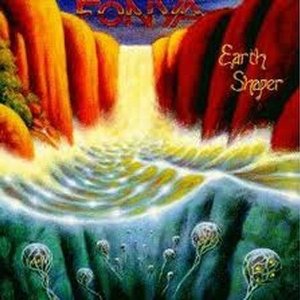 Earth Shaper is a travel into a fantasy land. A rather colorful travel where most of the times the instruments are equal in conveying the soundscapes to these imaginary places. It could be described by making a reference to Tangerine Dream's Tangram in its essence. We find voluptuous yet simple melodies surfacing here and there amongst waves of sequential rhythmic patterns and chording work. A comparison could locate Earth Shaper inbetween the aforementioned TD album and Jean Pascal Boffo's Carillons. A reverie is in the air, aptly forwarded in mostly open major modes by the keyboards, but also firmly supported by a very present percussive, yet flowing, approach on drums. The downside is that some passages are lacking the biting edge that would make them exceptional. But Fonya manages more often than not to maintain interest, mostly because there's an undeniable sense to the music, a coherence that reveals a direction, held together by a busy yet non-obstructive, flowing instrumentation. This album will be savored by listeners wanting a music that flows nicely by without apparent effort, although capable of letting itself be discovered in detail to an attentive ear. A fine album of instrumental 'vagabondage with a purpose' : a soothing and colorful magical voyage.