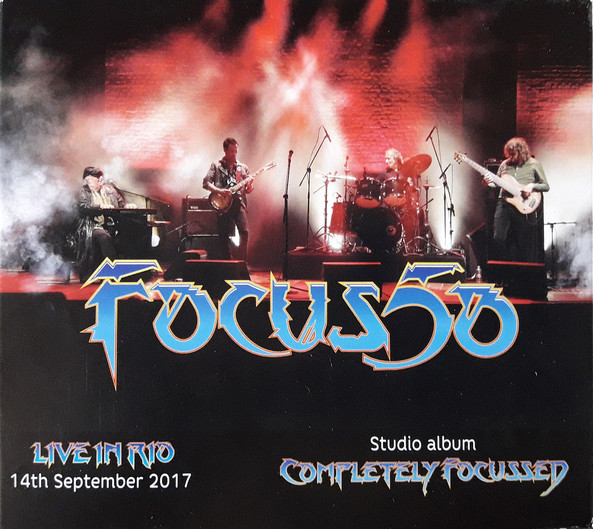 This deluxe set celebrates not the 50th album by Focus, but the 50th anniversary of the band’s founding, presenting a combination of live and studio recordings. Two of the CDs and the BlueRay are devoted to a concert in Rio de Janeiro from September 14, 2017. The current version of the band, with founding member Thijs van Leer joined by drummer Pierre van der Linden, who’s been with the band off and on since their second album in 1971, guitarist Menno Gootjes (a member since Focus X), and bassist Udo Pannekeet (on board since Focus 11). The band runs through excellent versions of tunes spanning the band’s existence from early days to more recent albums. Of particular note is “Eruption” from Focus II, given a rousing performance at full LP-side length. “Focus I,” “House of the King,” “Sylvia,” “P’s March,” “Focus V,” “Harem Scarem,” and “Hocus Pocus” all show up in the setlist, and the band is in fine form for all. All the things that made Focus work are present, from van Leer’s organ, flute, and scat singing to the classical-inflected compositions and flashy guitar work. Van der Linden is a powerhouse on the drums well into his 70s, driving the younger recruits to energetic levels. Any fan of the band should be happy with this concert. The other CD of the set, called Completely Focussed, features the contemporary band playing new versions of all eleven “Focus” pieces, which originally appeared on albums going all the way back to the 1970 debut plus a new twelfth installment; most of the band’s studio albums featured a van Leer composition called “Focus,” though they didn’t appear in strictly numeric order, and I think “Focus 6” only appeared on a van Leer solo release. In any case, having the pieces arranged like this as a kind of suite gives van Leer the opportunity to try some different arrangements with the familiar melodies. Most of the “Focus” installments have struck me as reminiscent of Edward Elgar’s “Pomp and Circumstance” in the stately way the chords move and how the melody fits over them. These processional sections are interrupted by more rock-oriented sections, encapsulating the essence of the band (minus the occasional unhinged goofiness of songs like “Hocus Pocus”). Putting all twelve installments in sequence does highlight how similar they all are — it’s almost like twelve versions of the same song arranged slightly differently, almost universally at the same tempo and in the same key. “Focus 8” comes out with a shuffle rhythm, providing a welcome variation, and “9” is arranged for piano and guitar alone, along with some denser harmonies than other sections. The new “Focus 12” is the highlight, being a gentle acoustic piece for piano and guitar with a bit of electric guitar doubling the melody. It’s harmonically more sophisticated than previous tracks, and works really well as the closer. Listening to all of them in one 53-minute go is overkill to my ear, but others may enjoy it more. Word is out that Focus has a new studio album in the works, and this collection serves as a solid capstone to one of the longest careers in progressive rock, from which they can move ahead into their second half century.