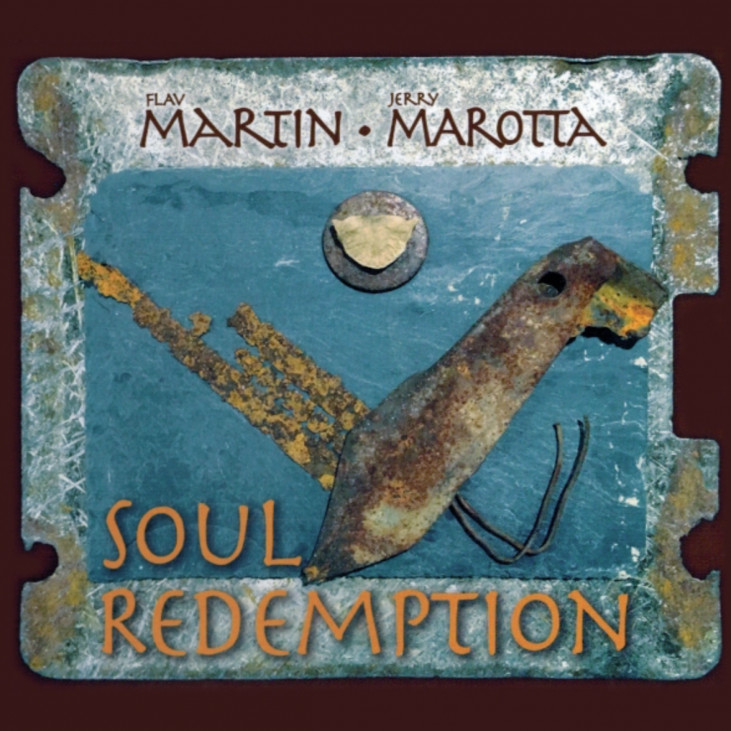 I fell in love with Jerry Marotta’s drumming on Peter Gabriel’s second solo album. His use of toms as part of the patterns was distinctive, and not something I’d heard before. He made important contributions to other Gabriel albums, along with recordings by Hall & Oates, Joan Armatrading, Robert Fripp, and even Carly Simon. He was also great in Tony Levin’s band. Flav Martin I’d never heard of before this CD arrived in my mailbox. Apparently he’s a singer-songwriter with a reputation involving unusual ways of playing acoustic guitar. He combines finger-picking, tapping, and percussive techniques into an interesting and sometimes flashy style. Soul Redemption, however, doesn’t really exhibit much of that, concentrating on mellow songs with good percussion. The arrangements are filled out with bass and keyboards, along with the occasional harmonica or accordion, and the songs are uniformly mid-tempo affairs with hummable melodies. There are no unexpected turns or complexities, and Martin’s pleasant voice is inviting, whether in English or the occasional Portuguese or Spanish. One standout track is a cover of The Hollies’ classic “Tell It to My Face,” which has a Spanish flavor in the acoustic guitar and is partly sung in Spanish. It’s got a slightly faster tempo than the other songs, and features a bit of electric guitar that probably involves a tapping technique. All in all, the album cruises by in an inoffensive manner, nice enough but not really providing enough of a spark to encourage repeated listening. It’s well made and takes no chances, so in honesty I’m not the target audience for it — I like my music with an edge to it, with an element of risk. Still, for fans of good songwriting, it’s worth checking out the Bandcamp page to see if it appeals to you.