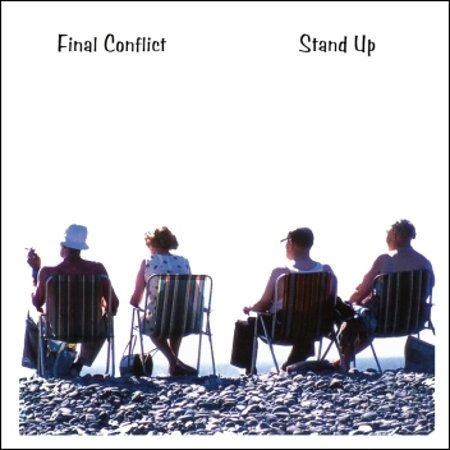 Stand Up nicely sums up the Final Conflict modus operandi. Out front are the dual lead guitars and vocals of Brian Donkin and Andy Lawton (who I swear is Sean Bean’s long lost twin brother), backed up here by Steve Lipiec (keyboards), Dave Bridgett (bass), and Chris Moyden (drums.) Their sound blends British hard rock of bands like Wishbone Ash with the 80s prog of Genesis. Donkin and Lawton are capable singers and guitar players, and when combined with the arrangements that tend toward minor key rock the album has a very masculine vibe. The proggier elements enter when Lipiec is accentuated in the mix or on those few moments that feature his playing, as in “T230.” The songs on Stand Up — most dealing with issues afflicting British society — are well crafted with fairly conventional verse-chorus structures and enough sticky melodies and hooks that even a casual listen is a rewarding experience. This reissue gave the band a chance to revisit the mixes, though the drums still suffer from a less than stellar recording job. They’ve also taken an already long album and packed it to the gills with two bonus tracks, the first being a re-recording of “A Moment in Time” from 2003’s Hindsight, and a fine, slightly Floydian new song, “Losing It All”, both featuring current bassist Baz Elwood and drummer Henry Rogers. Until the new album arrives this reissue provides an excellent starting point for those interested in what FC has to offer.