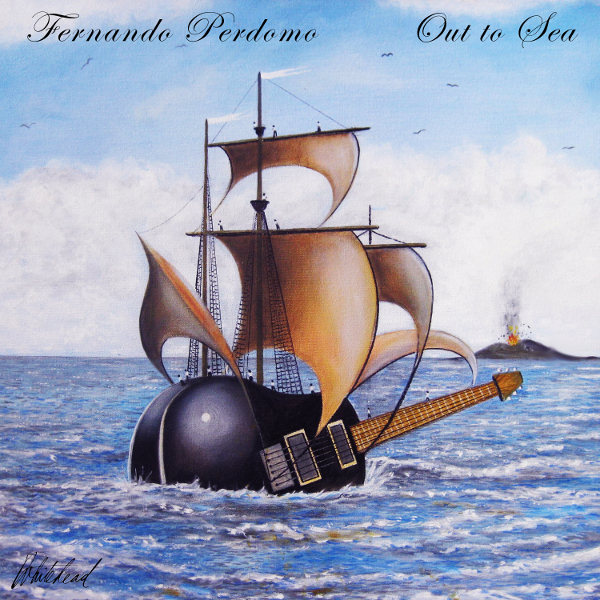 Fernando Perdomo is guitarist and bassist for the Dave Kerzner band, and Out to Sea is an appropriate title for his debut album, given that he has been a regular on the “Cruise to the Edge” progressive rock cruises over the last couple years, and in fact Out to Sea was offered as a pre-release on “Cruise to the Edge 2018” where he performed with Kerzner and guested on numerous other performances. Perdomo is a masterful guitarist and able to fill in all the arrangements on all eight tracks of this purely instrumental outing, save the drums on one cut. Perdomo has a superb ability to analyze the work of other artists (his favorites, of course…) and create compositions and arrangements in their style without actually nicking their melodies and ideas, and about half of this album is dedicated to pieces like that. The opener “The Architect” is a case in point, billed as a tribute to the late, great Peter Banks, this song sounds like a dead ringer for early Yes, maybe some lost instrumental out-take from Time and a Word. Perdomo has studied the band’s style from that period, and especially Banks’ input, and put together something that is is in the same style and spirit, much in the same way Steve Morse did on his two Major Impact albums. Fast forward a few tracks and we have “The Future According to Roye” (tribute to the late Roye Albrighton and his band Nektar), and here again, Perdomo has done his homework well, pulling the writing and arrangement style from their best-period albums (Sounds Like This, Remember the Future, etc.), putting himself in that mindset, and creating something new that would fit right in. A similar treatment is done for Curved Air (on “Sonja”) though Perdomo is not a violin player, so a key component is missing therein, but it’s still a wonderful tribute, as is “De Boerderij” serving as a tribute to Thijs Van Leer and Focus, though done without flute. Perdomo shows his own compositional and arrangement chops free of any need to pay tribute on the remaining four regular album tracks with “The Dream,” “Dreaming in Stereo Suite,” the beautiful “Roses Spread All over the World” and the title track; all of these have a more blended set of influences that eschew any immediate identification. The closing bonus track is a dreamy cover of “Starless” dedicated to the late John Wetton, capturing the song’s essence throughout its five minute duration. All taken, a great release that certainly places Perdomo at the forefront of new progressive rock.