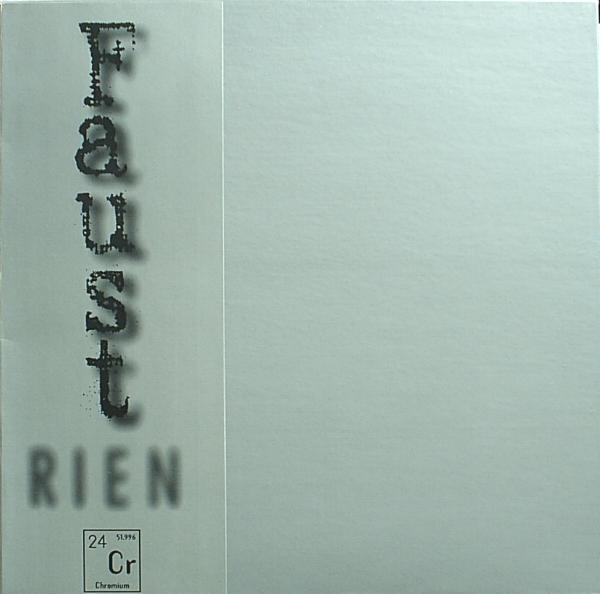 Rien is the first new Faust studio release in over twenty years and they have lost none of their humor over the decades. Rien is French for Nothing and that word sums up all the information you get with the CD. The CD booklet is eight blank silver pages. The insert is silver paper with no writing on the spine. The CD is painted silver with RIEN printed on it. If you lose the spine wrap that comes with the CD, you would be at a total loss to identify the disk. There is also a little insert card with a photo and what I guess to be track titles, but it is impossible for me to determine which title goes with each track. The CD contains seven tracks. Tracks one and seven continue with Faust’s little joke. Track one contains three seconds of silence and track seven contains the album credits spoken simultaneously in French, German, and English by band members and friends! Produced and mixed by Jim O’Rourke, the remaining five songs contain 41 minutes of Faust’s unique improvisations of cacophonous distorted guitars, short wave radio, electronics, train sounds, ethnic instruments, tape loops, and random voices, all played with wild abandon. They continue to follow the Rien theme with long periods of nothing interspersed throughout the CD. The best track on Rien is track five (maybe titled "Listen to the Fish" — I don’t know but that phrase is repeated several times). It is a slow monotonous dirge of drums, distorted guitar, and electronics similar to their work with Tony Conrad on Outside the Dream Syndicate but with lots of additional ideas. Rien is not easy listening music and people may well yell at you to turn that $@!&* off! Don’t be discouraged, Rien proves that Faust still has the same spontaneity they had twenty years ago.