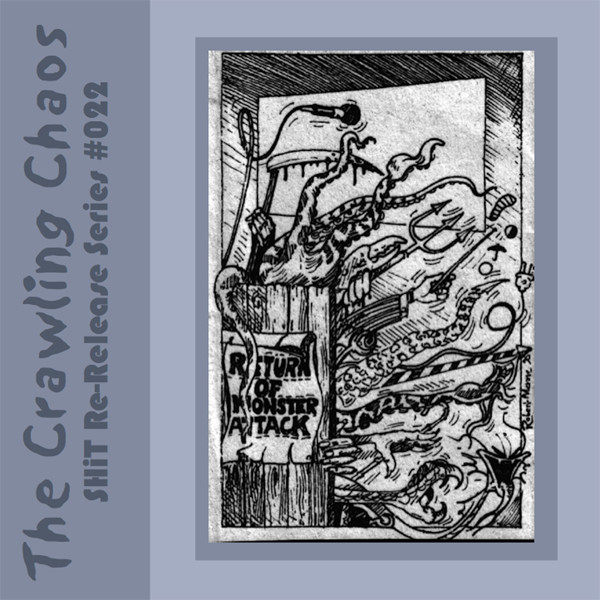 Lumpy Davy and Brt from the psych band The Smell of Incense started Famlende Forsøk in 1981, their music inspired by such great bands as Cabaret Voltaire and Throbbing Gristle. Because Brt could not sing nor play an instrument, they decided to combine poetry and music (keyboards, tapes, guitars, and percussion). ChrispH joined the band in 1983. Since then Famlende Forsøk has performed and recorded intermittently between other side musical projects such as the psychedelic band The Smell of Incense. From its beginning, Famlende Forsøk has been obsessed with HP Lovecraft and his Cthulhu mythos. They released their Lovecraft project One Night I Had a Frightful Dream in 2002. Return of Monster Attack, originally released on cassette in 1996, is the first Crawling Chaos title to be re-mastered and reissued on CD. Though not a concept album, Return of Monster Attack is a loose collection of dark and edgy songs about HP Lovecraft (“Cthluhu Lives!”), David Lynch's Twin Peaks (“Looking for Bob” and “Music from the Black Lodge”), Beelzebub, and Freud. Brt’s otherworldly vocalizations lend just the right air of the outré to the music. The mood of the disc is somber, but right in the middle of the darkness is a ray of light from the psychedelic and dulcet sounds of Bumble B on “Spider and the Octopus.” If you are looking for that perfect disc to haunt your late nights, this is it. However, keep in mind the owls are not what they seem.