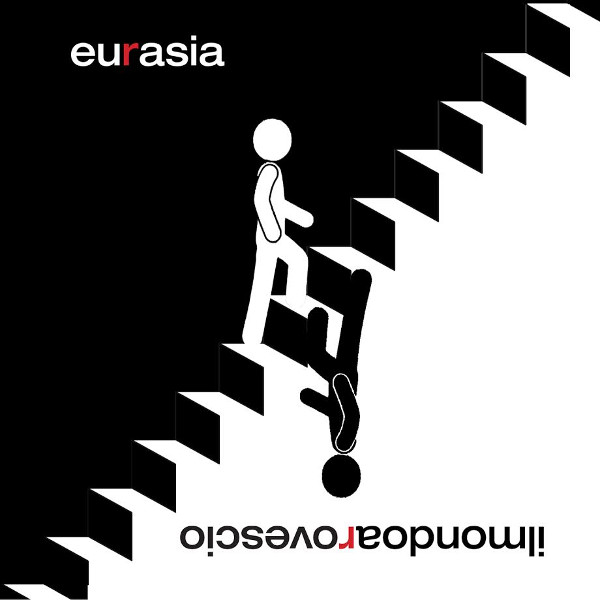 Eurasia is a new Italian band that blends progressive, jazz, and Canterbury sounds in the ten tracks on their debut album Ilmondoarovescio (The World Upside Down). Eurasia features five well known Italian musicians who have played in many different bands since the 80s: vocalist Moreno Delsignore (Scomunica), jazz keyboardist Simone Torriano (international piano teacher), bassist Paolo Cagnoni (bands ranging from Irish folk to heavy metal), jazz-trained drummer Diego Marzi (founder of avant-prog band S.A.D.O.), and guitarist Marco Cavallo (Dreams of Glory). They are also joined by several guest musicians on various tracks: Luigi Ranghino (keyboards), Alberto Mandarini (trumpet), Edoardo Gennaro (keyboards), Silvia Mangiarotti (violin), Hekga Ovale (violin), Alyona Afonichkina (viola), and Cecilia Santo (cello). Most of the songs are excellent progressive rock / jazz fusion tunes with Moreno’s vocals evoking Peter Hammil at times, accompanied by Marco’s inspired guitar work. Some tracks lean more towards jazz than rock. The song that I find the most interesting is the nearly eight-minute “Bispensiero.” This is the one track that features Alberto’s trumpet that lends a Miles Davis vibe, and the vocals tend towards the odd and experimental. Fans of Area, Arti & Mestieri, Picchio dal Pozzo, and the Canterbury sound will love this album.

Eurasia is a quintet (+ guests) of experienced musicians hailing from Piemonte in the north-west of Italy, Ilmondoarovescio (meaning “the world upside down”) is their debut release. Across the album’s ten tracks, every member gives 200%, the result being an amazing combination of chops, power, original compositional ideas, and outstanding arrangements, bringing together elements of rock, jazz-rock, with touches of pop, folk, and avant-garde, all in a respectful progressive rock style that puts them on a level with many of the best Italian bands going back to the early 70s. The five came together from the short lived Cometa Rossa Band (which should give the reader some idea), from that experience Eurasia was born. Out front is multifaceted singer Moreno Delsignore, with an amazing range and power, sings exclusively in Italian, and it takes a listen of the entire album to understand his capabilities and power. Guitarist Marco Cavallo understands well how to support a singer like that, as well as when to let the notes rip in amazing solos, or to touch the listener’s soul with beautiful acoustic work. Simone Torriano is their keyboard man, punctuating on piano, then filling with electric piano – often providing hints of the Canterbury sound, and numerous other keyboard sounds to give the band a full melodic sound, there’s a lot here and he gets it right, always. The rhythm section of bassist Paolo Cagnoni and drummer Diego Marzi have a tasty way of giving every song exactly what it needs, either as bottom end support or as part of the arrangement. The opening of the secont cut “Fatti i Fatti Tuoi” ("get your own business") illustrates the rhythm section’s skills well. Guest players provide additional keyboards, trumpet, even a string quartet on the closing track “Sorano Tamoto.” Their capability of blending all of these diverse elements into their sound seamlessly, and at the same time not sounding like anyone else out there right now truly makes them stand out from the pack.

Miriodor - Jongleries Élastiques – It has often been said that in music, the rests are just as important as the notes. Well, apparently this message never got through to Miriodor. Once they get rolling, they don't stop until the end. ...  (1996) » Read more

Alpha III - Voyage to Ixtlan – Amir Cantusio Jr's Alpha III project has been a Brazilian mainstay since the early 80s. Voyage to Ixtlan is Cantusio's eighth album under this name and has gone from independent productions to...  (1996) » Read more

Netherworld - Mørketid – For some there seems an inseparable bond between sound and place. For the avant and drone practitioner this tie is usually realized through field recordings and subsequent signal re-coding –...  (2008) » Read more

Tales - The Seskian Wars – Here we have another in the continuing series of electronic concept albums from French synthesist Jean-Luc Hervé Berthelot. This one tells the story of an interstellar conflict between an evil...  (2002) » Read more