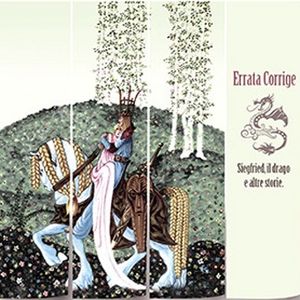 In 1976, an obscure band from Turin, Italy privately released a very rare LP, Siegfried, il drago e altre storie. The band broke up in 1975 before the release and member Marco Cimino went on to play bass with Arti e Mestieri. Now 40 years later Errata Corrige, with sufficient budget, modern technology, and experience were able to rerecord their album the way they intended for it in 1975. In addition to the four friends – Mike Abate (guitars and vocals), Marco Cimono (keyboards, flute, vocals), Gianni Cremona (bass, acoustic guitar, vocals), and Guido Giovine (drums, percussion, vocals) – they are joined by Manuel Zigante (cello), Martin Mayes (French horn), Federico Forla (oboe), Ivan Bert (trumpet), and Diego Mascherpa (sax and clarinet). In the mid 70s, Errata Corrige were not interested in making political statements. Instead they wanted to tell stories with their music and Siefried, il drago e altre storie is just that, a collection of fantasy inspired musical paintings. This is dreamy soft Italian prog rock that recalls Genesis’ Trespass and Nursery Cryme. And the remarkable tenor vocals of all four members are more than a passing reference to Le Orme. There is an accompanying DVD of the band recording the album that features a different band member introducing each of the first four songs. Watching the DVD you notice that the music has been carefully scored and performed by these skilled musicians. As a bonus, there is a faithful cover of King Crimson’s “Cadence and Cascade” with Italian lyrics penned by the band. And of course there is plenty of Mellotron to satisfy your cravings. This album is a breath of fresh air, as today’s prog bands seem to focus more on technical artistry and complex arrangements. And if you are inspired to hear the original, Black Widow has released an anniversary edition of the 1976 album on vinyl.