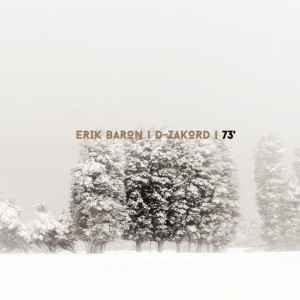 Erik Baron has been operating on the fringes of the French progressive / avant-garde / experimental music scene for nearly four decades. In the early 80s he was the bassist of the zeuhl-influenced band Pseu, who recorded their only album in 1981-82, only to have it collect dust until it was finally released by Musea in 2004. Later in the mid-80s he was a member of Orient-Express with multi-instrumentalist and singer Pascale Jakubowski, releasing a cassette album in 1985. Perhaps his best known endeavor is his “group” DésAccordes which recorded their interpretation of Terry Riley’s In C in late 2003 (released on Gazul in 2005), and then a few years later, after the name morphed to D-Zakord, released interpretations of Jannick Top’s De Futura (Hiroshima) along with several original pieces. The origins of the album at hand are quite interesting, starting with D-Zakord’s live performances of a new piece of music titled “58’ ” in March 2010 with a group of about ten, basses and guitars only, which was eventually recorded three years later, but remains unreleased to this day. Baron felt it needed more. In late 2019 Baron’s original recordings from 2013 were augmented with some new material as well as additional instrumentation (orchestral drums, gongs, singing bowls, vocals, metal percussion, and more) to create the ten-part piece “73’ .” Throughout its ten sections, the guitars and basses take on the role of mostly ambient drones while the percusive elements offer highlights, punctuation, and variation. The work proceeds at a pace that could best be described as evolutionary, mostly without a lot of sharp edges or sudden changes, though the near eighteen minute “Part 3” offers a propensity for percussive excitement throughout its duration. This would best be described as ambient music, but not the sleepy kind. The vocals by Valérie Capdepont, who doubles on gongs and metal percussion, only appear in a few places, as a wordless instrument in “Part 4,” and some spoken words on “Part 6”. With five droning basses, orchestral drums, and even more ambient guitars, this is going to shake the walls with a good stereo system — surely it demands that the listener actually listen to it. You won’t be falling asleep anytime soon. Interesting and provocative are a couple descriptives that apply.