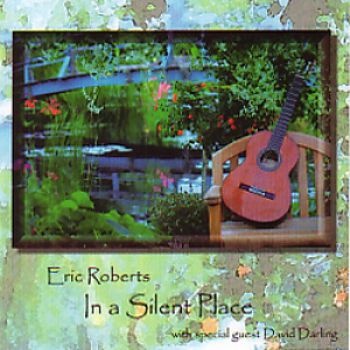 Eric Roberts is a bassist who has logged many hours supporting big name acts over the years and this is his recorded debut as a guitarist. Although largely a solo effort, he does get help from a few guests, most notably cellist David Darling, who may be a familiar name via his work with the Paul Winter Consort, Ralph Towner, and through his solo projects on the ECM label. For the most part, however, this is Roberts’ show, and his guitar playing is far and away the main event on every piece. Besides classical acoustic guitar, he wields guitar synthesizer, keyboards and bass to good effect, further building color and enhancing the mood of the pieces as required. Roberts is a fine player with a warm and delicate touch, though there are better instrumentalists out there as several instances of muffed intonation will attest. Where the album really succeeds, however, is in the songs’ emotional effects on the listener. In this respect I found the album to be a solid collection of light, atmospheric jazz in the vein of Paul Winter, Eberhard Weber, and Pat Metheny, as well as classic Brazilian jazz. Some of the tracks are therapeutic and relaxing while others go for a more impressionistic treatment. Some (“Reflections”) even have an improvisational edge and a commendable sense of adventure. “The River Runs” garnered a finalist slot at the Independent Music Awards and demonstrates impressive potential from a relative newcomer to the acoustic guitar. We’ll be watching.

Slivovitz - Hubris – Here’s one of those hard to classify albums that covers a lot of ground but is generally centered in a sort of ethnic area of the jazzosphere, with some nods to Zappa as well as middle-eastern...  (2010) » Read more

Generations of Pioneers Get Together