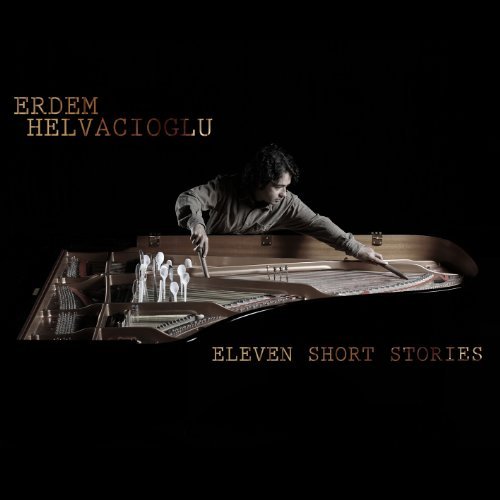 Helvacıoğlu's bio lists him as an electronic musician, but this set of eleven tracks consists entirely of prepared piano, both solo and multitracked. The stated inspiration for the music is the work of a variety of filmmakers from around the world, including David Lynch, Jane Campion, Krzysztof Kieslowski, and others, directors noted more for mood and vision than action and popularity — no Michael Bay or Roland Emmerich here. I say "inspiration" to make clear that these are not interpretations of the films' music or even accompaniments to specific scenes, but oblique references to the kinds of feelings evoked in the movies. The overall mood is calm and meditative, and while there are rarely what would generally be called melodies, there are themes upon which pieces are built, little motifs returned to as a kind of home base for exploration. The piano is coaxed into producing a wide variety of tones, percussive, buzzing, and resonant, in addition to normal notes; some tracks consist of notes and chords produced by unaltered strings and accompanied by a few particular non-standard sounds, others are built almost entirely of non-pianistic sounds. I find Eleven Short Stories to be quite listenable and interesting, not abrasive.

Zinkl - Dance Music for Insects – Electronic composer Anton Zinkl is now up to his sixth album, the first I’ve heard. If it’s any indication, I’ve been missing something pretty interesting. On his web site, Zinkl...  (2003) » Read more