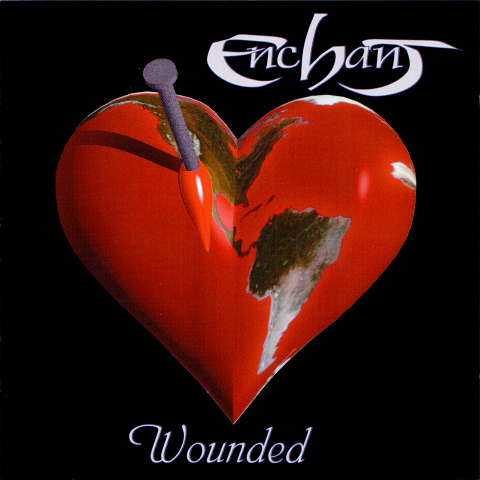 Three years after their debut A Blueprint of the World hit the streets, Enchant is back. Wounded is a much more somber and mellow record than Blueprint, and shows the band heading in a different artistic direction. Lyrically, the songs are more direct and emotional this time around. Strangely, the music is less balanced than it is on the previous album. Perhaps a strict comparison to Blueprint isn't really fair since that album, though technically the band's first, was actually a "greatest hits" of sorts since it contained some tracks that were five or more years old by the time the CD came out. At any rate, the focus of Wounded is clearly on the guitars and vocals. The keyboards are noticeably in the background, and the bass and drums are not exactly featured. For example, while there are guitar solos all over the album (good ones by the way), there is only one tune with what could be considered a keyboard solo... and it's short... and it trades off with the guitar... and it's by a guest musician who isn't really in the band! This imbalance is disappointing because all the band members are quite solid musicians. The album as a whole sounds like the guitarist and vocalist wrote the material, and then the other three guys came out to the studio and added their parts. This isn't to say that the songs are bad — just that they are skewed. Not everything about this release is different than before though. There are still some trademark complex meter riffs, like the end of "Below Zero" and "Missing." The latter of these two sounds somewhat like Dream Theater's "6:00" and is probably the best track on the album. The production, recording quality, and performance is still top notch too. Wounded will probably be to Enchant what Promised Land was to Queensryche. Some fans of the previous material will love the new moody and thoughtful direction, while some will not appreciate that aspect, but instead will miss the "classic" elements of the sound that are absent. It will be interesting to see what direction the band moves toward from here.