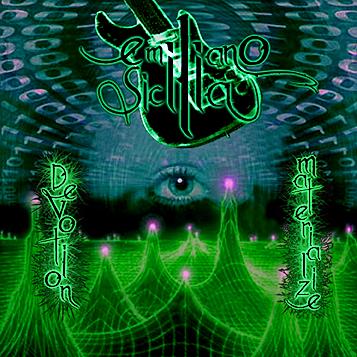 Now that we are in the era of cut-and-paste music, there are many more possibilities for bizarre juxtaposition of sounds and styles than back in the days of tape editing. Italian guitarist Emiliano Sicilia takes this to heart and pushes a lot of limits, taking the axeman heroics he obviously loves and slapping them together with everything from industrial noise to horror movie sound effects and more than I can name in the space I have. As an example, in the eight minutes of "Splatter on a Bluegrass" you get an unaccompanied shred solo, then a bunch of flamenco strumming and clapping with female vocals backed by a death metal growl and a techno thumping bass drum, then an electric country pick-fest, then an accordion tango crossed with a reprise of the flamenco bit, then (we're at the four minute mark now) a kind of industrial metal section that reminds me of Stabbing Westward, then you get to cycle through variations of the previously mentioned sections. For other tracks, add other styles. A little disjointed? You bet. Interesting enough to hold my interest? Not really. While it is a fascinating exercise in musical extremes and pretty cool at times, I just can't imagine what kind of mood I'd have to be in to enjoy it as other than a novelty. It goes on the list I use to prove that Exposé writers get really strange stuff in the mail, to be trotted out when someone doesn't believe my descriptions.

Praxis - Collection – If a guitarist who calls himself Buckethead, wearing a white mask with a Kentucky Fried Chicken bucket on his head and claims he was raised by chickens doesn't frighten the crap out of you, then maybe...  (1999) » Read more