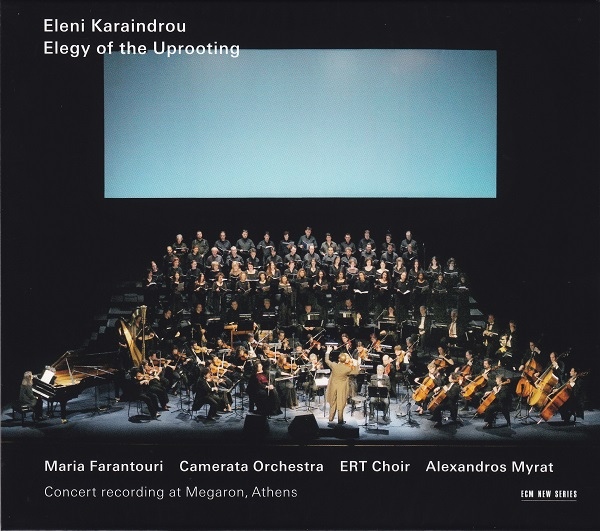 Karaindrou may be best known for her film scoring work since the early 80s in her native Greece. Elegy is a sprawling two-disc live set recorded at Megaron in Athens in March 2005; it collects a number of the themes from her previous film works – primarily The Weeping Meadow and Trojan Women, but also including material drawn from her other works as well. This is all presented with a small fourteen piece orchestra (which includes the composer herself on piano), a choir, and a six-piece traditional instruments ensemble (lyra, laouto, harp, ney, kanonaki, santoor, bendir, daouli, reflecting the composer’s interest in ethnomusicology), a total of 110 musicians in all. Throughout the 38 pieces that make up the program, the listener will be presented with sections of fully orchestrated classical music, vibrant choral pieces, and interludes of traditional folk themes and ideas. When it’s most engaging is when two or more of these elements overlap. Parts where the traditional instrumentation and low density choral work intersect often bear an ancient vibe that may remind listeners of artists like Dead Can Dance, Mors Syphilitica, Unto Ashes, and the like. Given the composer’s propensity for Middle Eastern melodic themes, when the full choir makes an entrance, these moments can be absolutely stunning. Two full discs of this makes for a lot of music to digest, but patience and perseverance will reward.

Barclay James Harvest - Time Honoured Ghosts – After leaving the Harvest label, BJH met up with U.S. Producer Eliot Mazer (Neil Young) who recorded the band in San Francisco in the summer of 1975. The quartet was on the upswing with bassist Les...  (2005) » Read more