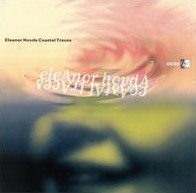 Hovda is an important, yet little known composer who has been active on the contemporary music scene for over twenty years, mostly through live performances, scores for dance companies (of which Coastal Traces is but one), and as a composer whose work has been performed by numerous string and wind ensembles, including California Ear Unit, Kronos Quartet, Boston Musica Viva and the St. Louis Symphony. Surprisingly, though, is that this is the first complete CD of her own material, featuring pieces composed from 1991 through 1998, for the Nancy Meehan dance company. Sometimes the way music is created is at least as interesting as the music itself. The pieces herein were composed for a three-piece ensemble featuring Libby Van Cleve on double-reeds (oboe, english horn, shenai), Jack Vees on electric bass, guitar (electric and twelve string) and waterphone, and the composer playing the innards of a grand piano using friction mallets, plucking and using 'strings' made of violin bowhairs, with a microphone inside the piano to capture the resonances. So what does it sound like? The music here doesn't lend itself well to the standard twelve-tone western-classical descriptives, being more of an ambient/industrial/experimental type nature. Sounds from any source tend to be protracted and change slowly over time, and often exist barely at the threshold of hearing. At some points a sound (usually one of the reeds) may jump out of the mix and assert itself, giving some definition to the otherwise amorphous nature of the bowed piano strings and bass. At other times the whole ensemble comes up to a louder growl. The fact that the entire performance here is acoustic allows it to offer some subtle details in the area of harmonics and resonance that electronically produced music cannot match. But because so much of this is played at a level that is barely audible, much of its detail is lost in a casual listen. Those ambient explorers looking for some acoustic relief from the otherwise-nearly-all-electronic ambient realm might do well to check this one out.