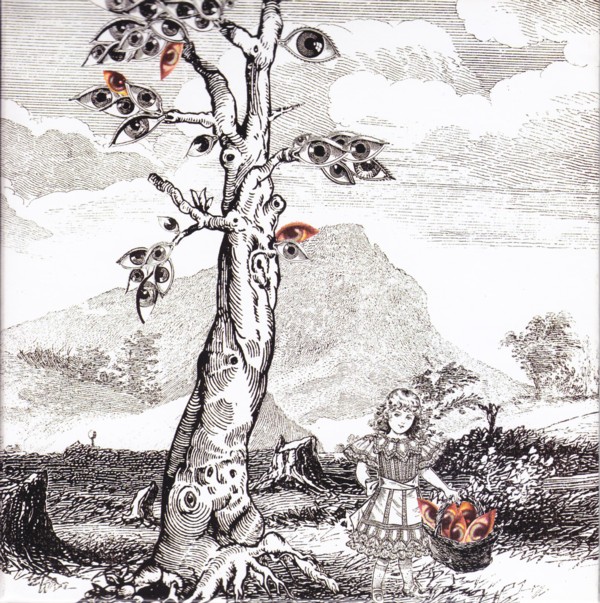 A Long Red Ladder to the Moon is the latest in a long string of EKS solo releases. Considering Edward’s cassette, EP, LP, and CD output since 1984, this is something like number 30 and it is like a visit with an old friend. Lots of familiar reminiscing as well as sharing something new. There is always something on an EKS release that reminds me of his earlier work, but I can never point to it directly. Beta-lactam Ring Records released the CD in October 2005 and finally released the 3 LP vinyl edition in January 2006. The CD issue comes in a gatefold sleeve with a small insert containing the track titles for the nine songs. The vinyl edition is superbly produced, each LP weighs one pound with a minimum of surface noise. The first two LPs contain the same music as the CD, but the third is a bonus LP that comes with the first two hundred copies and contains two side long pieces: “Hey Rainman (first version)” and “A Rainy Afternoon in 2001.” The difficulty with the vinyl set lies in figuring out which sides are 1, 2, 3, etc. as the disk labels are artwork without any track titles and there are no obvious etchings around the hub or track separations to aid you. But that is a minor complaint. The music is wonderful and sure to please any EKS or Legendary Pink Dots fan. Highly recommended.

Leger de Main - The Concept of Our Reality (10th Anniversary Edition) – [Note: This review was written of the original release.]Here is an album worth getting excited about. Leger de Main, based in Ohio is simply a trio, brothers Brett and Chris Rodler handle drums, and...  (1996) » Read more