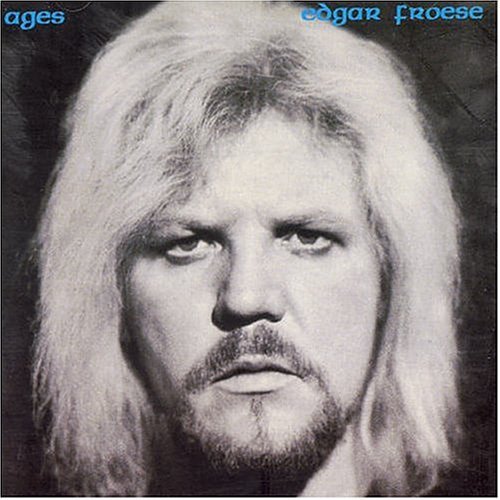 I know what you may be thinking: Froese's parent group hit the skids ten years ago. But have no fear as Ages is a 1978 classic-TD-era release. So where's all the rejoicing? I feel pretty silly myself. After all the hoopla over Klaus Schulze I expected equal fervor to greet Froese's long unavailable Ages album. Well it's been a year now and nary a squeak of fuss or fanfare has sounded. All around us privately produced records receive CD treatment, but it takes Virgin 15 years to reissue a world renowned artist. Nor did they break a leg in the CD's production, the insert being nothing more than a reduced LP design, with nothing extra to satisfy the poor slob who doles out nearly 25 bucks for the privilege. Froese's career remains as hermetic as his visage is stoic. At least the entirety of the original double-LP comes to you intact. Ages was the fourth release on his own, in a string of self-made works which filled in the gaps of his already busy one-album-per-year group schedule. Stylistically we find him, as would be expected, somewhere between the Encore and Cyclone side of TD. Compared to earlier solo outings, you're looking at something more simplistic and rather tame - neither exuding the rich experimentation of Aqua, nor blissfully moody as Epsilon in Malaysian Pale - but on the other hand exploring settings that we wouldn't find on a group project. "Pizarro and Atahualpa" cooks right along the Nile River valley, Mellotron providing the rhythm rather than melody. "Ode to Granny A" finds him in a poppier mode. And, something I have always loved about late-70s Tangerine Dream, there are drums throughout, provided by Klaus Krieger. Froese adds guitar here and there and you'd swear you are hearing out-takes from Encore! But largely it's a synths and drums affair. Cyclone this is not, but it's good enough for me, and if you follow similar great 70s works by Froese and his colleagues, then Ages is a must.