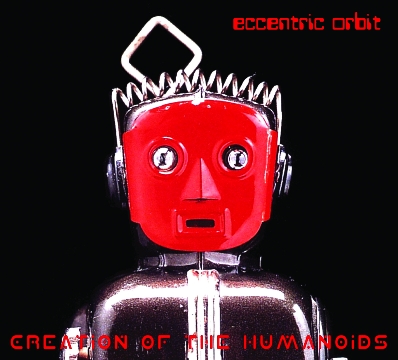 Eccentric Orbit’s second album finds the band with a revised lineup and a solid bump upwards in sophistication. They’re still a keyboard-heavy entity focused on vintage instrument sounds, but some welcome additions, including – gulp! – guitar. The change in personnel is partly due to the tragic loss of original drummer Mark Cella, who completed about half of this album before succumbing to brain cancer. New drummer Rick Landwehr, a veteran of groups playing progressive rock and jazz, helped the band complete the album. The other change is the addition of Tom Benson on violin, guitar synth, and “MandoBot” (which I think is something like a guitar synthesizer triggered by a mandolin), who had worked with Eccentric Orbit on tracks for a Gentle Giant tribute album. Continuing members Bill (bass) and Madeleine (keyboards and wind synth) Noland remain as the core of the band, with Madeleine’s keyboards usually the dominant factor. Once again the keyboard sounds tend toward the vintage, with Hammond, Mellotron, and analog synthesizers (again, both real and emulated, but sounding pretty darn good). Speaking of sounding good, the quality of the recording is a step up from Attack of the Martians, really clear and with all the parts sounding crisp and rich. Bill Noland favors an overdriven sound on his bass, not generally full-on fuzz, but with a very aggressive tone that serves to add some welcome grit to the sound. Keyboard-dominated music can sometimes come off as too polite, with clean sounds that result from running instruments directly into the mixing board rather than through amplifiers, so the bass is especially welcome. Madeleine’s keyboards and wind synth are stellar, with inventive lines, excellent sound choices, and fluid technique. I’m at times reminded of classic PFM, Quella Vecchia Locanda, and Museo Rosenbach even more than any English bands that may come to mind (ELP, Greenslade, solo Wakeman, and so on). Creation of the Humanoids shows the continued growth and progression of an outstanding band, and it’s a lot of fun the listen to as well.

Nouvelles Lectures Cosmopolites - Unis & The Cereal Killer – NLC is a project led by one Julien Ash, who has apparently been at this for some time, although these two releases were my first exposure to his work Their relative anonymity may not last, as they are...  (2001) » Read more