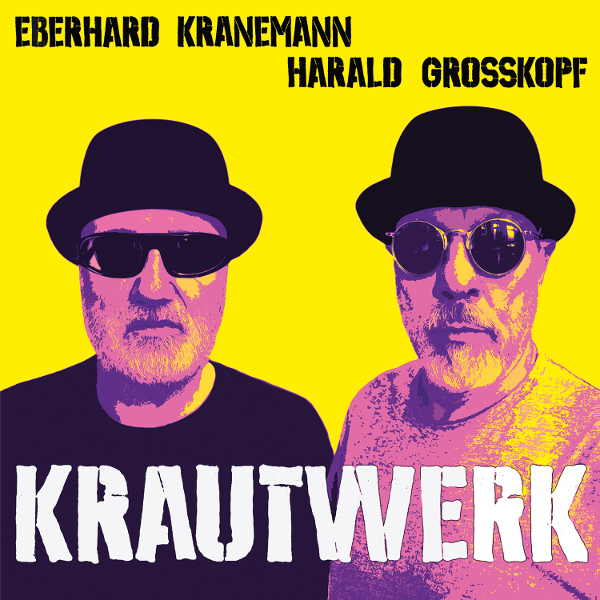 Both Harald Grosskopf and Eberhard Kranemann have a long musical legacy dating back to the early days of Krautrock. Eberhard was one of the founding members of Kraftwerk, Neu!, and Pissoff, plus recording under the pseudonym Fritz Müller. Of course, Harald Grosskopf needs no introduction, starting out as the drummer with Wallenstein, Klaus Schulze, Ash Ra, and on to solo and other projects. However these two musicians never met until they were both performing at a festival in 2016. Sensing a kinship, they decided to collaborate, merging their cosmic sonic visions, and Krautwerk is the result. Krautwerk presents six different views of contemporary Krautrock. The disc opens with “Midnight in Düsseldorf Berlin,” a slow electronic melody with sporadic narration, and a steady, almost motorik beat. “Ou Tchi Gah” follows with fuzzed electronics and odd vocal noises that references Kraftwerk’s “Boing Boom Tschak.” “Texas Paris” is a relatively short piece with searing electronics that sounds like a JImi Hendrix guitar solo. “Happy Blue” has a metallic and mechanical sound with a repetitive rhythm sequence that morphs into a happy beat and eventually decays into random sounds as the track ends. “Buddhatal” is perhaps the best track on the disc. This is a dark, pulsating, floating, abstract soundscape with strange electronic animal sounds and squeaks. It is much like Werkbund’s 1987 release “Skaggerak.” The disc closes with “Be Cool,” featuring rapid electronic rhythmic loops, subliminal voices, and lots of variation to maintain your interest. Krautwerk is a wonderful merging of the Berlin and Düsseldorf schools of electronic music, as both musicians continue to be creative and push musical boundaries.