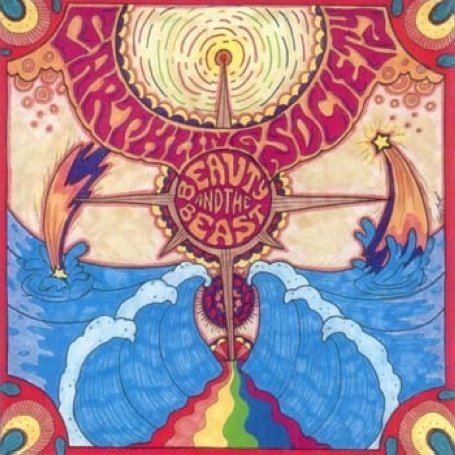 Beauty and the Beast is British based Earthling Society’s fourth full-length release, and seems to authentically capture that swirling heady psychedelic space rock sound out of an earlier era, perhaps from no later than around 1971 or '72. A quartet of g/k/b/d (although their bassist only plays on a couple of the album’s ten cuts), with guest players on flute and harmonica, the main movers here seem to be Fred Laird (guitars, vocals, bass on the other eight cuts, keys, mandolin, bouzouki, samples, theremin, and production) and drummer / percussionist Jon Blacow, who together share a hand in all the compositions. Those compositions seem to be informed more by classic 60s rock (The Who, Beatles, Nazz, Brian Jones-era Stones, early Floyd, etc.) and others from the first psychedelic and early progressive eras than any of the better known spacerock units of that time or since, which means in a nutshell that these guys know how to write good songs, not just jam endlessly in a mindless groove. That said, the arrangements and embellishments often tend to be hallucinatory and provocative, with heavy reverb and use of theremin and other electronic trappings (reminding a bit of Fifty Foot Hose), as well as an intentionally slightly low-fi vibe in keeping with much of what was produced in that bygone era. If this piques the interest, definitely check out the samples on the band’s myspace page.

Ivanhoe - Polarized – Can't get enough of that Iron Maiden? Check out Polarized. There is no doubt, as musicians, Ivanhoe are first rate. The singer, Andy B. Frank is very good, if he's a German singing in English,...  (1999) » Read more

Have They Gone, or Have They Not?