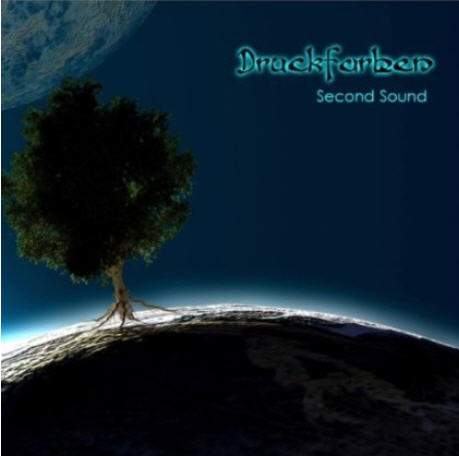 While the most imitated and emulated classic prog bands are probably Genesis and King Crimson, third in line is probably classic Yes, with Gentle Giant somewhere in the top ten. Druckfarben is a talented Toronto based five-piece that finds a home somewhere between the latter two, with enough of their own originality thrown into the mix to keep their compositions and arrangements forward looking and interesting from the first song to the last, and enough instrumental firepower to create a serious wow factor at numerous points along their eight song sophomore studio effort. Phil Naro and multi-instrumentalist / de-facto bandleader Ed Bernard share the vocals, and they clearly have that Anderson/Squire harmony thing going, and while Bernard’s guitar and violin solos are the highlight of many of the songs here, the entire band is a pretty impressive unit. The band is rounded out by keyboard wizard William Hare, and the rhythm section of Troy Feener and Peter Murray on drums and bass respectively, Murray contributing in the vocal department as well, all the same personnel as on their 2011 debut. Many standouts here, including “Another Day” that starts with a brilliant acoustic mandolin solo by Bernard, then followed by full-on vocal harmonies, eventually launching into a complex rocking full band piece that shows just what impressive cohesion these guys are capable of. “Liberated Dream” shows the band’s harder rocking and funkier side, where bass and drums tangle it up with the keyboards in the instrumental center-section before Bernard’s guitar blasts out a soaring solo. The closing title track is a side-long epic that evolves nicely from section to section, and probably the album’s strongest effort; it alone is worth the price of admission. Many more highlights here, too many to enumerate. This will definite be of interest to all fans of classic prog, and particularly bands like Gentle Giant, Kansas, vintage Saga and CTTE era Yes.