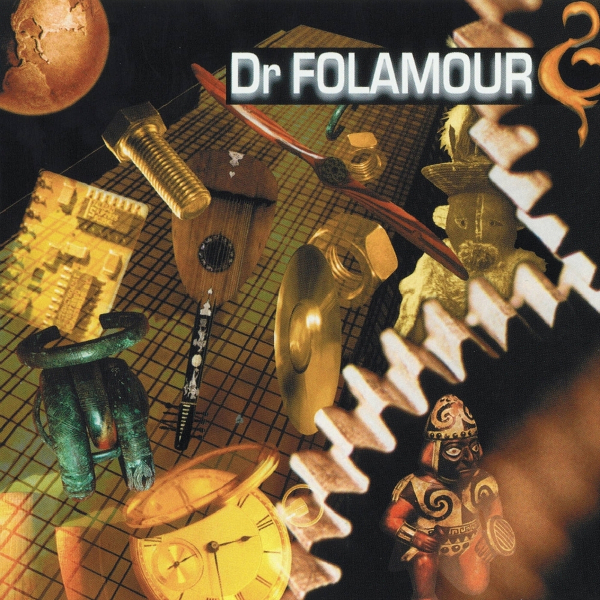 Dr Folamour is one of Musea’s new discoveries from France. Essentially the duo of Marc Beugnies (drums) and Marc Mourgues (guitar and bass) plus a variety of guest musicians and vocalists, Dr Folamour presents nine original songs that integrate a variety of world music (Greek music, Native American chanting, and flamenco) with aggressive guitar powered progressive rock. Dr Folamour has more of an edge and takes more chances with this hybrid of ethnic and rock music than Musea’s other “world music” band baG. If you are looking for some energetic and adventuresome music, Dr Folamour is for you.

About halfway through my first listen to Dr Folamour's eponymous debut, I had to go and find my copy of baG's Soudain l'Éléphant (also on Musea) to verify if the two lineups shared any members! Indeed, both bands seem to be operating in very similar territory – an instrumental world-influenced progressive rock, using standard instrumentation to achieve these ends. Take a band like Shadowfax and give them an injection of power guitar-rock and you've got some idea where these guys are going with their sound. Dr Folamour seems to be a rotating lineup revolving around drummer / bassist Marc Beugnies and guitarist Marc Mourgues, with guests on bass, violin, occasional keyboards, and voices. Much of the guitar-work is of the crunchy variety, giving their music a solid rock backbone, yet the compositions involve plenty of non-western progressions and middle-eastern and Indian themes; one track "Guanahani" even gets into native American territory complete with the chanting and all. Not a lot of keyboards to be found here, and frankly the music is probably all the better for it, as there's not a lot of emphasis on soloing. What keyboards there are are pretty much limited to textural or percussive duties. Vocals are pretty much limited to effects (no lyrics) except on "Suite," where there is some sung / spoken / shouted vocals a-la-Talking Heads. In all, this is one of Musea's best new releases in a long time, and will certainly be vying for a spot on my best-of-1996 list next spring. Definitely worth your attention.