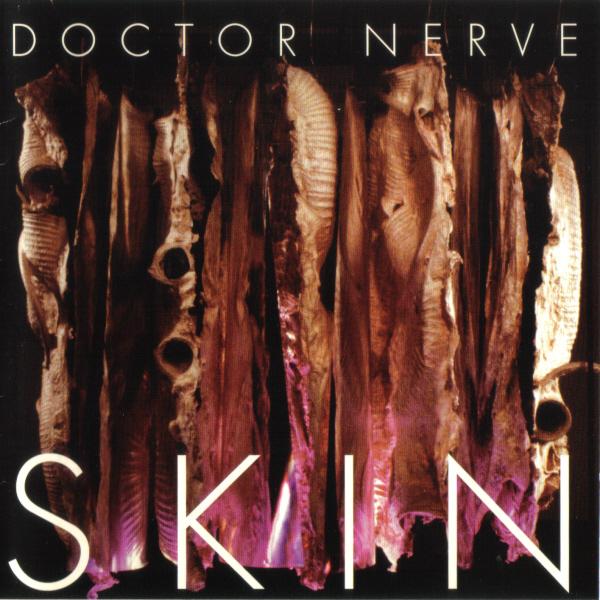 Well, no one could rightfully call Dr. Nerve derivative. That's for sure. Imagine really distorted heavy metal guitar, clean vibes, frenetic drums and bass, and then throw in a horn section to boot – that pretty much sums up Dr. Nerve. Remember that more than two people can solo at the same time and don't forget to include random computer composed tracks either. I'm not sure where Dr. Nerve is going sometimes, but they sure are in a hurry to get there. Guitarist / composer Nick Didkovsky plays in the grand style of Black Sabbath and Metallica – fast power chords played through Marshall stacks with a Rat distortion pedal to insure ultra contortion of the guitar signal. He uses distortion to great effect – not unlike Neil Young in some places. None of the other players get too grungy with the exception of some noisy horn and wind solos now and again. Actually, most of the solos are noise of some sort – sometimes guitar, sometimes sax, sometimes primal screaming. The overall band sound is a quirky combination of hard rock with free-form jazz. It's interesting that Didkovsky is the composer of the material, given the fact that his metal six string work doesn't suggest that he would be responsible for the jazz leanings in the compositions.

The music is very jagged and bumpy. There isn't much flow to the music sometimes and the melodies are often tough to discern. These aren't the kind of tunes that you'd be humming to yourself while waiting for the elevator [unless you're a writer for Exposé – Ed]. Some songs are so diverse that, within a track, they go from fast paced hard rock to an almost minimalist form. The bass player and vibraphonist really stand out as the best sounding players, though the it's not as obvious with the vibes since they aren't featured quite as often as some other instruments. The drums, on the other hand, while not necessarily played poorly, sound terrible! They're extremely dull and have a flat sound throughout. That's my main gripe about the album. With that exception, the album is pretty interesting and riveting to listen to. The randomizing effect created by the computer for some tracks can be intriguing. For example, on "Our Soldiers Are Soft Pianos," what sounds like a piano solo is actually a computer with interactive software controlling a MIDI instrument with sound bytes other Dr. Nerve compositions. Fans of experimental jazz and avant garde music will like this music for its creative side, and rock fans will enjoy the tight drums and bass with heavy guitar. However, there's enough of both these styles that if either one is annoying to you, it might be tough to endure the entire album.

Are you nauseated from the seemingly endless abundance of new releases in tired old predictable styles? Do you welcome the next whiny overstylized singer fronting a band of wannabe clones like the next outbreak of the flu? Well, worry not. The Doctor is back, rested and ready for major surgery! Doctor Nerve is the amazing instrumental rock octet from New York City fronted by guitarist / composer / visionary Nick Didkovsky. The lineup consists of your standard rock lineup of guitar, bass, and drums, augmented by two trumpets, sax, bass clarinet, and vibraphone. Their music is a tightly arranged and extremely complex rock with a strong foot in the jazz door, an ever-changing pastiche of odd angles, multiple-time signatures, twisted and fractured melodies and artful incongruities all delivered at an unbelievably high energy level and breakneck speed. They seem to be able to hold on to a groove well, though many of the rhythms are still nearly impossible to follow (try tapping your foot to this!).

In the four years since 1991's Beta 14 OK, Doctor Nerve have essentially returned to the direction they were headed up with their first two releases Out to Bomb Fresh Kings and Armed Observation ('84 and '87 Respectively). Skin is far more energetic and funky than any before it, with Didkovsky's axe brought to the forefront of the mix (which is where it always should've been) and driven home in a punchy heavy-metal style, typified by tracks like "Dead Silence," "Plague," and "Preaching to the Converted." Yet there's still plenty of variety here, and the pace changes frequently throughout the album's 54 minutes: There's "Little Johnny Stinkypants," which might remind of Japanese contemporaries Tipographica, "Every Screaming Ear" – which is basically twenty seconds of a shouted complaint (what?), and "Our Soldiers Are Soft Pianos" which closes the album on a more gentle note. This is an adventurous album, and one I'm sure most could get into with little effort. A comment on the tray insert reads "Listen to this record loud and in one sitting. Open your windows so your neighbors can hear it too." I Agree. This is among the best of '95 so far.

Dr. Nerve's latest album features more of composer / guitarist Nick Didkovsky's uncompromisingly dense and aggresive avant-garde rock. The music on Skin swings from a somewhat restrained RIO sound to heavy punk-influenced pieces driven by metalish guitar power chords. The jerky syncopated rhythms and barely tonal melodic meanderings remind one of RIO groups such as Banda Elastica in places, while the heavy guitar presence and some bizarre spoken interludes betray a more hardcore sound on several of the tracks. The intriguing juxtaposition of these two elements on many of the tracks of Skin, however, is one the things that makes this album work so well. Contrapuntal horn and vibraphone lines mingle with and play off of the powerful rhythmic riffing, giving the music a slightly schizophrenic and thoroughly unique feel. Didkovsky lets forth a few frenzied guitar solos, but for the most part Skin features incredibly tight ensemble playing, with excellent individual performances from the whole band. This is perhaps one of the strongest and most coherent Dr. Nerve releases to date; a fantastic album for the adventurous listener.