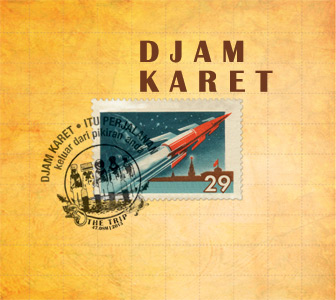 The indonesian subtitle Itu perjalanan – Keluar dari pikiran anda roughly translates to "The trip – Outside of your thoughts," which is an appropriate starting point in describing this latest offering from Djam Karet, a single forty-seven minute multi-part suite for five multi-instrumentalists. After listening to this a dozen or so times and trying to count and itemize all the different sections as the piece progresses and evolves, the music quickly draws me in and I completely lose track of where I am, instead becoming part of that organic flow and constant evolution, riding the flux and ending up in some completely different place where the mechanics of the composition is irrelevant. Those who are familiar with Djam Karet's previous work – everything from the floating ambient to the incisive rock, will be right at home within this expanded sonic wonderworld. The band is now officially a five piece, with Mike Murray (from Hillmen) joining on guitar, while Gayle Ellett has moved over to keyboards and flute almost exclusively; the only thing he plays with strings now is the Greek bouzouki (a larger member of the mandolin family). Since several sections of this epic feature lengthy quiet passages, drummer Chuck Oken now spends more time with synths, samples and processing. Mike Henderson and Aaron Kenyon, on guitar and bass respectively, round out this new five-piece version of the band. This one was mixed differently that most of the band's previous efforts, in that even in the heavier guitar parts, one can still hear all the sonic detail and layering of the other instrumentation in the background. If there ever was an album that was made for headphone listening, this is most certainly it.