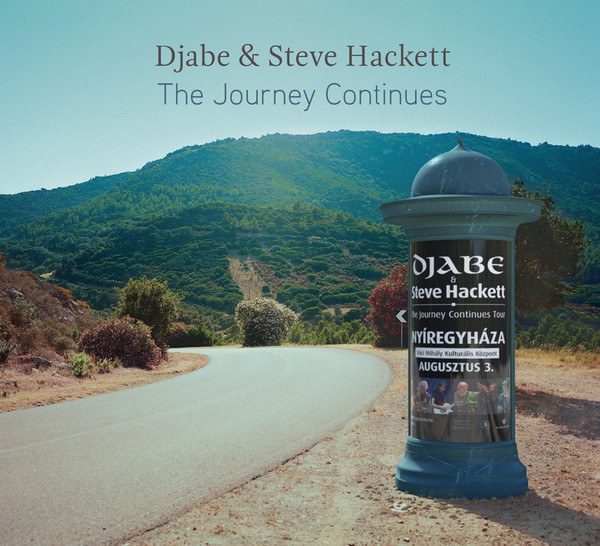 Djabe is an outstanding Hungarian quintet that could best be described as ethnic-folk-jazz-rock; we haven’t reviewed any of their releases here since their earliest offerings (and they are prolific, with at least a couple albums per year), so it’s high time we spotlight them again. Part of the reason for their obscurity is that their albums have been released on the Gramy label, which doesn’t seem to have good distribution outside Hungary. In the last ten years or so, they have been working with guitarist Steve Hackett, creating demand for their product in the UK (at least those featuring Hackett), so Esoteric has been releasing their albums there, while Gramy releases them at home. In 2017 the band (with Hackett) released The Sardinia Tapes – Life Is a Journey, recorded in a church in Sardinia. The 2CD+DVD set at hand is essentially a live follow-up to that, this time the DVD features full concert footage of a show recorded in August 2019 in Nyíregyháza, Hungary (many of the earlier CD releases included a 5.1 surround sound DVD-A). The concert footage is what makes this set special, replicating what’s on the two CDs, even adding a track recorded live in Washington, DC. The group’s trajectory over the decades has gone from more of a world-folk music to a mix of inventive jazz and rock, but some of the former remains, and like any band that stays together for many years, members have come and gone, although the two original mainstays that remain from the beginning are bass guitarist / vocalist Tamás Barabás and guitarist Attila Égerházi. They are joined by Péter Kaszás (drums, percussion, vocals), János Nagy (keyboards) and Áron Koós-Hutás (trumpet and flugelhorn). With two guitarists, Égerházi plays a variety of guitars — acoustic, electric, nylon string — along with hand drums, while Hackett plays exclusively electric, and he even sings lead on “Tears for Peace.” At this point in their career they are almost exclusively an instrumental band, though there are a couple other vocal tunes here including “Life Is a Journey.” Strong world and ethnic flavors come into play with “Gallop” and the transcendent “Last Train to Istanbul,” while “Lava Lamp” is a side-long jam that gives each player ample time to turn in outstanding solos. With Hackett in the band, some instrumental Genesis material is performed with alternate arrangements, including “Los Endos,” the instrumental section of “Firth of Fifth,” “Hairless Heart,” and “In That Quiet Earth.” For the listener who has wondered about Djabe, without the expenditures of purchasing their four dozen previous albums, The Journey Continues serves as an excellent introduction.