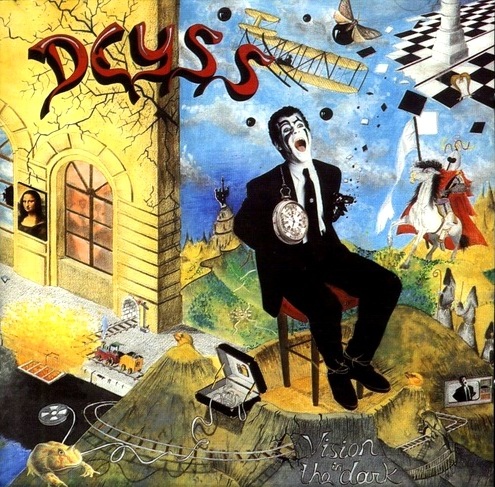 Just the mere mention of the Swiss band Deyss is enough to send many progressive fans – even hard core neo-progressive loyalists – into cringe-fits or outbursts of hysterical laughter, mostly due to their very amateurish 1985 debut album At-King, which featured cheesy imitation Marillion styled album cover art, a completely inept vocalist, and a band that seemed void of any original ideas. What many may not know is that Deyss returned two years later with a dedicated lead vocalist and two years of additional playing under their collective belt, to produce a far more respectable three-sided album that, at it's worst, is still infinitely better than their debut (still copping a lot of Marillion ideas, though), and at it's best – as on side three's sidelong mostly-instrumental "Vision in the Dark," downright cooks. The band is more sure-footed and mature here, and on tracks like "The Crazy Life of Mr.Tale" cut loose with a fury that is indeed rare among neo bands. The new vocalist – simply 'Jester' – is a much improved singer, but still has a major problem with his English pronunciation (comparable to Clepsydra – it seems like many Swiss bands have this 'problem'), and he has no business writing lyrics either, let alone allowing them to be printed in the booklet! But overall this was a major step in the right direction for a band who disintegrated just as they were beginning to show some promise – especially if the eighteen minute title track was any indication of where they were headed.