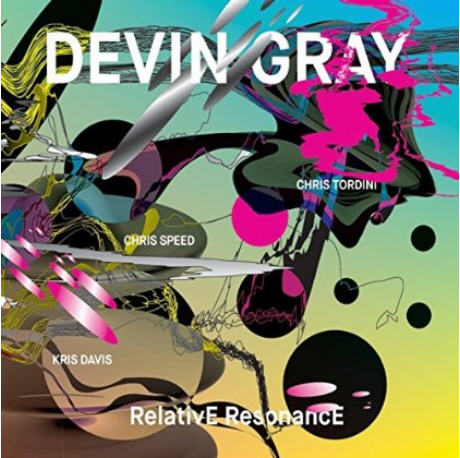 While drummer Devin Gray has been making a name for himself on the East Coast jazz scene for several years, having played with Transit Heavy (with Satoko Fujii and Natsuki Tamura), the Richard Bonnett Trio with Tony Malaby, and as a touring member of the Daniel Guggenheim Quartet with Peter Madsen and Sean Smith, among many other credits, RelativE ResonancE is only his second time out as bandleader and composer, following up on 2012’s more free-improvisation oriented Dirigo Rataplan. This time, the focus is more composition-driven, though still leaving plenty of room for personal expression from the players. The quartet is rounded out by reed player Chris Speed (tenor sax and clarinet), pianist Kris Davis, and double bassist Chris Tordini, this being a completely different grouping than his 2012 release, and now having played together for nearly five years, their approach is near telepathic, with every player complementing one another through the many hairpin transitions found within these grooves. The early tunes like opener “City Nothing City” and “In the Cut” tend to work more like traditional compositions, while some of the later cuts, beginning with the third number “Notester,” are far more explorative and seemingly improv oriented, though never wandering off into totally free spaces. “Undo the Redo” and the succinct title track double down on the group’s best tendencies, the latter with Speed and Davis trading off lead roles, then working in tandem with the others to round out a tightly-knit composed effort. This is an extremely talented group all around, and hopefully we will hear from them again.

Lonely China Day - This Easily Assimilative People – I wrote about this Chinese band’s previous CD back in #36. On this latest effort, they continue their path moving away from sounds typical of rock bands and further into the esoteric realms of...  (2011) » Read more