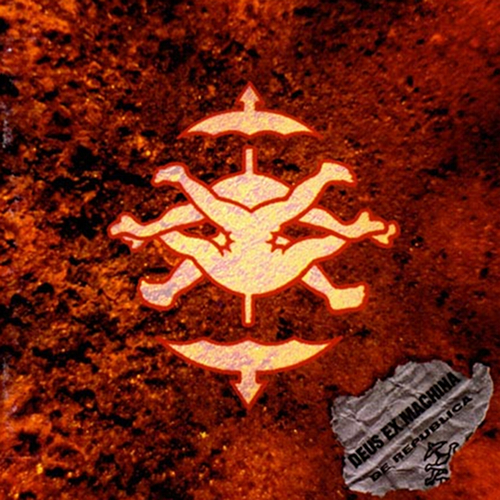 An old book, dating from as far as 1800 BC, was found recently in good condition by an archeological search. A treatise superficially presented as ways to acquire power and glory over people. Some consider it as a parallel book to the Bible, a Dark Bible inspired by the Devil, that offers the most terrifying evil, an idiotic state of thought over all centuries: the didactorship of mediocrity. This Latin text was called De Republica. What more fitting introduction to this new Deus Ex Machina than this metaphor, this Felliniesque pretext for satirical comments on social and political concerns. The text tightly blends – sung as always in Latin by the expressively strong voice of Alberto Piras (who also composed nearly all the material) – with a shattering mixture of harmonic exploration and expert musicianship, where rockier auspices and RIO-styled gestures meet in a frenzy maelstrom. Keyboardist Luigi 'Riccia de Feccia' Ricciardiello brings his Rhodes abilities to an unsettling sonic universe that may require a few listens to find an anchor point from which the listener can explore further. A dense interweaving of musical interventions, propelled at a maddening speed with guitar, either acoustic or electric, violin, bass and drums raging inside the manifestation of structures themselves twitching like a drowning man in a sea of uniformity and mediocrity. People won't idolate Man anymore, the powerful individual, but His image and the image of the Earth's Administrators and of the dearly loved ones who agitate new scepters. There is an impression of 'unrootness' in the soundscape, of uneasiness.

There are many grooves in De Republica: the band gets down to it in a very efficient manner, as we got accustomed to with previous DeM discs. But this time around there's more of an interplay between the lead instruments as they share quirky lines all over. In the past, and especially with their first album, Maurino Collina's guitar was at the forefront. This time the album is to be taken as a whole, a single breath expired into the Chaos, a rightful meeting of Progressive music and social concerns into an intense boiling cauldron of spicy ingredients. The text is also, you have guessed it, quite dense, and we could wish an English translation could have been included in the booklet. All in all, an excellent musical and social statement, to be ranked along the best of the nineties in progressive music.

Deus Ex Machina has hit the bulls-eye with their third album. De Republica is an absolutely brilliant masterpiece of Italian progressive rock, exquisitely manifesting all the elements of the band's sound that were even hinted at on their first two releases. Featuring driving, aggressive fusion mixed with wickedly complex rhythms, hints of RIO and avant-garde sounds, and Alberto Piras' unbelievable vocal skills, this album recalls the very best of Area while preserving a freshness and originality of its own. Anything that could have been criticized on previous albums has been significantly improved, perhaps not quite to perfection, but very close. The band presents an exceptionally balanced sound, showcasing not only Mauro Collina's heavy and virtuosic guitar technique, but also some blistering Minimoog leads and solid keyboard work from Luigi Ricciardiello, and some prominent violin contributions from Alessandro Bonetti. The drumming of newest member Loris Claudio Centopellitrotta is superb; busy and varied, it is unquestionably one of the main reasons this album works so well. Piras' vocals are amazing as always, revealing a range and power very few vocalists have ever possessed. Quite simply, this is one of the finest progressive rock albums of the 90s, and an absolutely essential release.

With their first two albums, Deus Ex Machina quickly established themselves as the darlings of the Italian prog scene, blending heavy rock and complex music in a most original way. Those two releases, while flawed, were excellent enough to have the prog community eagerly awaiting the issue of De Republica. And for good reason, as it's hard to find fault with this new album. It is obvious from the start that most of the problems with the previous album have been corrected here. That album suffered from muddy sound, whereas this album benefits from clear, professional-sounding production. The violin and keyboards were mixed far too low and the drums far too high on the last album, here all instruments are properly proportioned sonically. As a result, that last, self-titled album was pretty much a guitar / vocal show, whereas this is much more of a group effort. There are also some changes, most notably the addition of a cellist, resulting in a broader string sound, on occasion resembling chamber music when the strings take the spotlight. There is also a more experimental bent brimming just under the surface, rising occasionally as on "Aeterna Lux," a tape-collage of electronic sounds and multi-tracked voices. And regarding the voices, vocalist Alberto Piras (who may well be one of the greatest latter-day rock vocalists) seems to be pushing his voice to the very limit on this release. The effect is intense and fascinating. My one complaint would be that the tracks tend to fade out just when they seem to be approaching a climax, an annoying tendency. As a result, some tracks sound inconclusive.

But what makes this album so worthwhile is that they took what worked on their previous releases, concentrated and intensified these tendencies, and added new appropriate twists. There is still the great hard-rock guitar, the analog or faux-analog keyboards, and intricate, intelligent musical structures flawlessly and energetically played. Anyone who enjoyed Deus Ex Machina will fall in love with De Republica immediately. My vote for best of '95 goes out unequivocally to this. If you haven't heard any Deus Ex Machina yet, you owe it to yourself to hear this album.

Deus Ex Machina are in my opinion the pinnacle of the 90s Italian progressive scene, an outfit continually experimenting with sound and new musical ideas. Both Gladium Caeli and their self-titled second are among the best progressive rock offerings in the last ten years, yet it still surprises me how much they have improved for their new release, the concept album De Republica. While this album may be my album of the year, I thought it might be best to qualify my praise as this may be a bit too adventurous for some listeners. If you are familiar with the group and enjoy their music, then this will almost certainly be to your liking as this is a huge step up from two albums that were great in their own right. Deus Ex Machina have come a long way as a sextet, in which every member has improved their chops a hundredfold. Simultaneously, the group has taken some more adventurous steps in modeling and refining their sound. Alberto Piras, group leader, philosopher and currently progressive rock's most cutting-edge vocalist has a style that uses scales and dissonances in a very original manner (although Demetrio Stratos and Robert Plant must have been strong influences). Coupled with the Latin lyrics (maybe time for a change lads?) Piras admittedly may be too difficult for listeners oriented to surface listening or more conventional symphonic styles.

Musically, the group is vibrant, tight and extremely exciting, with vast amounts of rhythm and split second time changes, and more upbeat jamming than on any album in many years. The drumming reminds me a lot of Giulio Capiozzo (Area) or Furio Chirico (Arti e Mestieri) and is worth the price of the disc alone. That’s not to take away from any of the other brilliant musicians, but it certainly puts the band on a pedestal in the midst of most of progressive rock's run of the mill modern percussionists. There are hundreds of great moments on the disc, not least the monstrous guitar solo in "Res Publica II," a statement that goes beyond Fripp or Frith and still gives me chills every time I hear it. To wrap it up, this easily one of the best truly progressive rock albums in the last 15 years and will take its place among the best the 90s has to offer. My highest recommendation.