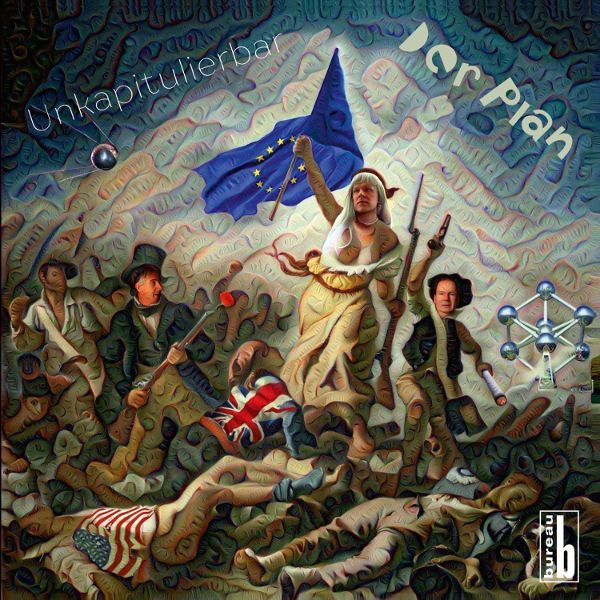 Der Plan was an 80s post punk German band consisting of Moritz R, Kurt Dahlke (aka Pyrolator), and Frank Fenstermacher. Their early albums were filled with schizophrenic percussive electronic tracks, oddly processed vocals, weird dissonant electronics, and experimental sound collages. They broke up in the 90s, with Pyrolator remaining active. When they met at Andreas Dornau’s 50th birthday party, the trio decided to get back together and record a new album. Gathering sketches, snippets, and ideas that had been churning around over the years, they entered Pyrolator’s Ata Tak Studio in Berlin and over three weeks recorded Unkapitulierbar. In the early days, Der Plan would improvise and then add lyrics after the fact. In contrast, for the new album they started with the lyrics and song structures, resulting in a different and more mature set of 15 tracks. Elements of the old Der Plan are there on tracks like “Lass die Katze stehn!,“ “Körperlos im Cyberspace,” and “Wie Schwarz ist ein Rabe?” We are also treated to some light-hearted Euro pop, a dub beat song, a couple of bluesy numbers, latin jazz, and the oddball “Zu Besuch bei N. Senada,” 49 seconds of crickets, birds, and electric piano all seen through Der Plan’s unique lens. If you are expecting the old Der Plan, you will be disappointed. Today Der Plan 2017 is a polished, mature, melodic reincarnation of one of Germany’s more unique bands.