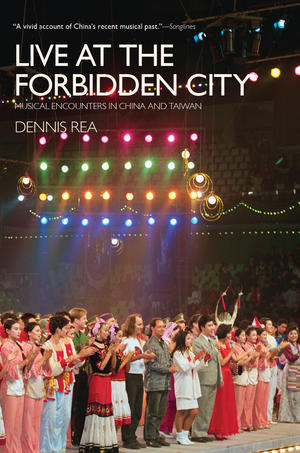 Dennis Rea is a Seattle area guitarist who’s worked with Jeff Greinke, Bill Rieflin and may be known to some through his participation with groups Land and Stackpole. Long before he made his name in the Northwest music scene, he undertook an amazing musical odyssey into Communist China during the late 80s and early 90s, which this book chronicles. His visit was ostensibly as a university English teacher in the central Chinese city of Chengdu, but once the locals discovered they had a musician in their midst who was skilled in jazz and rock guitar, Rea’s situation took an unexpected turn. He was quickly catapulted into the then underground Chinese rock scene and became somewhat of a local legend and source of inspiration to a multitude of budding guitarists and musicians for whom Western rock music was a vital outlet of expressing their frustration with Communist government policies. This placed Rea in an interesting position, both as mentor and musical celebrity, but also as a thorn in the sides of party officials who looked on rock music as a decadent and corrupting influence on China’s youth.

The book climaxes early with the chilling events of 1989 during the student uprising and subsequent government crackdown that is mostly associated with the massacre at Tiananmen Square, though witnessed throughout most large urban areas in China, including Chengdu. Rea provides a vivid firsthand account of the protests and violence that followed. His status as a foreigner and outsider — especially an American — lends this part of the book added drama and excitement.

The book also includes some interesting chapters chronicling Rea’s travels into the hinterlands of Western and Southern China, though for Exposé readers the real meat involves his experiences among the upper echelons of the early 90s Chinese pop and rock scene, plus his time spent among various ensembles (most notably Identity Crisis and The Vagaries) after he and his (now wife) relocated to Taiwan in 1990. Rea has since become a champion of the Chinese rock scene and a patron of its most important figures, foremost being Cui Jian, whom Rea describes as “Bob Dylan, John Lennon, and Kurt Cobain all rolled into one.” This book leaves the reader with a much better appreciation and understanding of what rock musicians in China have had to endure but also of the startling changes that have taken place in the past 15 years. Rea can take some pleasure in having had a hand in helping these changes to come about.