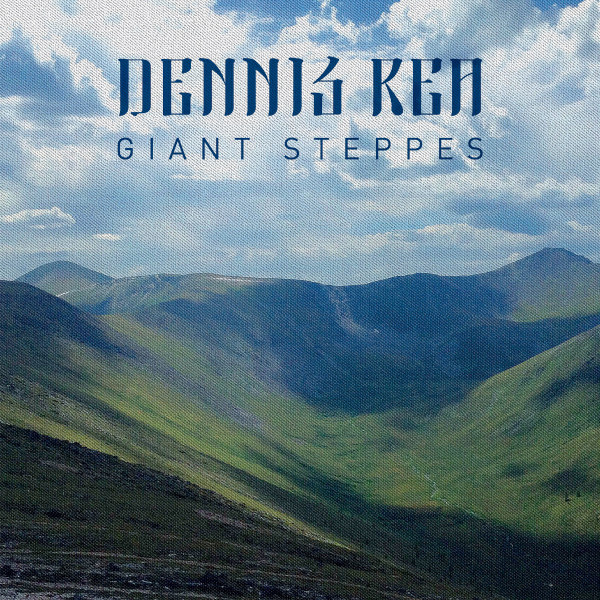 The genesis of the music on Seattle-based composer and guitarist Dennis Rea’s Giant Steppes certainly has as much to do with his years in China and Taiwan as an English instructor and musician as it does with his more recent endeavors as part of the MuzEnergo tours of 2013 and 2015 (a traveling caravan of adventurous musicians from numerous countries that played several dates across Russia in each of those years), as well as Rea’s own privately financed (read: out of pocket) tour with his ad-hoc band Terraine during 2019, with local musicians joining them for most of the tour — a tour where the music that would appear on the Giant Steppes release would be performed live. For those last three tours, Rea’s interest and curiosity was driven my the music of the Tuvan region, just outside the northwest border of Outer Mongolia, formerly (and briefly) the independent nation of Tannu Tuva during the first half of the 20th century, but annexed by the Soviet Union in 1944, with their traditions of throat singing and overtone vocals, where a single vocalist can sing two or more notes in low and high registers simultaneously. The draw of the possibility of being able to meet and perform with these musicians is what led Rea to join the MuzEnergo tour, not once but twice.

There are only four pieces on Giant Steppes (a play on the title of the John Coltrane album), each brushing close to or exceeding the ten minute mark, and no four tracks could be as diverse as these, drawing from Tibetan, Uyghur, Tuvan, Russian and other cultures of the general region. The album opens with the instrumental “Live at Gaochang (Uyghur Suite)” which is comprised of an arrangement of three different traditional numbers featuring six players on french horn, didgeridoo, trumpet, saxophones, drums, percussion, and of course guitars, effected and otherwise. As the piece snakes through numerous sections of music culled from China’s Xinjiang region on its way to its near seventeen minute conclusion, I am sometimes reminded of the music of the early Third Ear Band, though that may be as much coincidence as anything — the arrangement holds a magical intrigue and beauty that will reach deep into the listener’s soul. Next up is “Altai By and By,” Altai being the mountains that form the western border where China, Mongolia, and Kazakhstan meet, an arrangement of two songs from that region, the piece performed by the Seattle based vocal group Juliana Svetlichnaia and PAVA (four additional female singers and a hurdy-gurdy player — all Russian expats), with Dennis Rea adding lead guitar parts as the piece progresses, as well as doing some vocal patchwork using single notes sung by each of the singers in order to stitch the parts of the suite together. One pretty much has to recognize that the vocal performances here are nothing short of stunning. With “Wind of the World’s Nest,” Rea has pretty much composed an original piece in the Tuvan style, borrowing the lyrics from a poem titled “My Land” by renowned Tuvan poet Galsan Tschinag, and sung by the Tuvan singer Albert Kuvezin. Of all the pieces presented here, this one really rocks, with Kuvezin’s low growling vocal delivery and overtones being the star of the show, accompanied by sax, flute, bass, drums, and guitar by Rea, including what he calls “Throat Guitar,” a series of effects he strung together to make his guitar sound like throat singing. The final piece is the fourteen minute “The Fellowship of Tsering,” another multi-sectional suite formed of two songs by Tibetan singer and songwriter Jampa Tsering, although the versions here are essentially instrumental; the arrangement by Rea includes several players on keyboards, Tibetan dungchen horn, flute, electric bass, drums, and guitars, with Albert Kuvezin again singing (in a Tibetan style this time) as part of a long improvised section culled from a performance at the Krasnoyarsk Jazz Festival in 2019, along with field recordings of Tibetan prayer flags and spinning prayer wheels. The power of this music that fuses the sounds of disparate cultures is as interesting as it is listenable and thoroughly enjoyable, and Rea and his team have done a masterful job bringing it all together.

One last note, there is a companion 60-page book, Tuva and Busted, detailing much of the background information and a day-by-day of the three tours, available as a free download from Blue Ear Books, with a link on the Bandcamp site for this release.

Richard Johnson and Jud Martindale - Creatures of Habit – For those interested with tracking down the roots of master acoustic fret bender, Richard Leo Johnson, look no further! Uncovered from the independent release catacombs is a 1993 gem from Johnson and...  (2000) » Read more