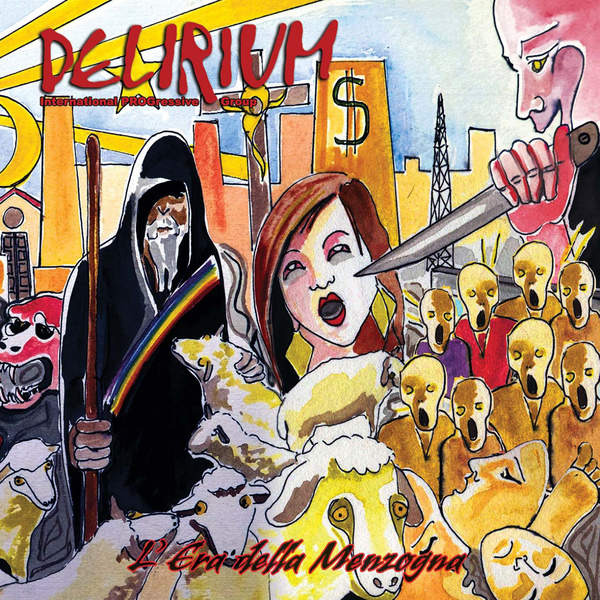 Today’s Italian prog rock scene consists of young bands as well as a rejuvenation of bands from the 70s. Delirium is an example of the latter, forming in 1970 and releasing their first LP in 1971, Dolce aqua. That debut album was an original mix of progressive, jazz, and tuneful melodies featuring the vocals and furious flute soloing of Ivano Fossati. In 1972 Fossati left the band to be replaced by saxophonist and flautist Martin Grice. Delirium released a second album in 1972 and then a third in 1974. That was it until 33 years later when they reformed and released a double live album, followed by a fourth studio album in 2009. In 2010 the band released a retrospective DVD, and in 2014 Alessandro Corvaglia from Maschera di Cera joined as the lead vocalist together with electric guitarist Michele Cusato and Alfredo Vandresi on drums, augmenting original band members Ettore Vigo (keyboards and backing vocals), Martin Grice (saxophone, flute, backing vocals), and Fabio Chighini (bass, ukulele, backing vocals). L'Era della Menzogna or The Age of Lies is the result. The album continues their mix of Italian prog rock, jazz, and melodic tunes dominated by Grice’s flute. The opening track, “L'Inganno del Potere,” is a spooky heavy rock song that contains a beautiful and bucolic flute solo. Some of the songs are cinematic orchestral progressive tunes. Then there is the funky jazzy dissonance “La Deriva” that stands apart from the rest of the music. The highpoint for me is the final track “Il Castello del Mago Merlino [Come un Tempo]” that clocks in at 11:20. This magnificent song integrates all of the elements into a cinematic finale to the album.