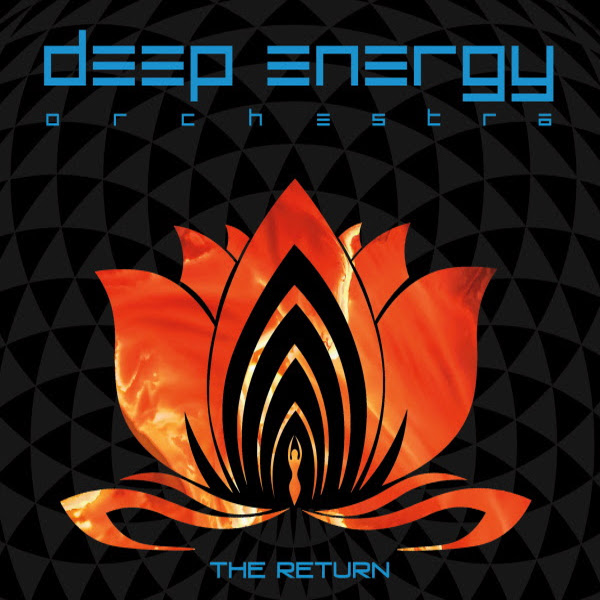 On The Return, Jason Everett expands his Deep Energy Orchestra from an eight-piece ensemble into a project involving dozens of musicians appearing on various tracks, with one featuring the Seattle Metropolitan Chamber Orchestra’s 20 members. All of the players from Playing with Fire are present at varying times, though only Everett himself plays on all the tracks, along with new recruit Fareed Haque on guitar. The album is organized into three main sections. The first is a four-part suite called “Moksha,” the fourth part of which is a new arrangement of “The Return” from the first album. The suite features Everett and Haque along with the first album’s drummer, V. Selvaganesh, joined by a different string section and additional sarangi, percussion, and throat singing. Electric violin is provided by Neyveli Radhakrishna and lead vocals by Ujwal Nagar; there’s a guitar solo part towards the end by Ken Jacobsen. The second part, called “The Battle,” is a rousing 7/8 jam with a great acoustic guitar solo from Haque. (As detailed as the credits are, there are still places where it’s hard to determine who’s doing what.) Following the “Moksha” suite are four tracks, three of which feature more or less the original group from the first album minus Selvaganesh. “Zyryab” is a great arrangement of a piece by Paco de Lucia where Haque’s multiple guitars get great support from Everett’s fretless bass. It’s a fiery performance that should impress any fan of flamenco guitar. “Call of Kali” is a substantial piece where Trey Gunn and original electric violinist Radhika Iyer make their first appearances and drummer Don Gunn provides solid backing. Iyer handles the main melody while Trey Gunn, Haque, and even Don Gunn all get excellent solo spots. “Grapes for Khan” brings in Chaz Hastings on tabla and Eric Smith on electronic percussion, and gives Iyer the first solo. Everett himself starts out a new arrangement of “Resolve,” which appeared in a different form on Playing with Fire. It’s just one of many stand-out moments for his fretless bass, and does a masterful job of weaving his improvisations with Iyer’s melody while Haque’s acoustic guitar lays a foundation along with Anil Prasad’s tabla. The final section of the album is an expanded arrangement of “Mysterious World” featuring the chamber orchestra, a dramatic setting for Iyer, Haque, and Trey Gunn, with the orchestra bringing added colors, especially with the brass and woodwinds. Even with all the incredibe musicianship from the featured soloists, it’s often Everett’s bass that provides the “Oh, yeah!” moments — he’s certainly in the top echelon of the world’s fretless bassists, consistently impressive without overwhelming the arrangements. In spite of the inclusion of three tracks that also appeared on the previous album, The Return presents an impressive evolution of the project, bringing in new sounds and further refinements to the basic premise.

Trolley will wake you up