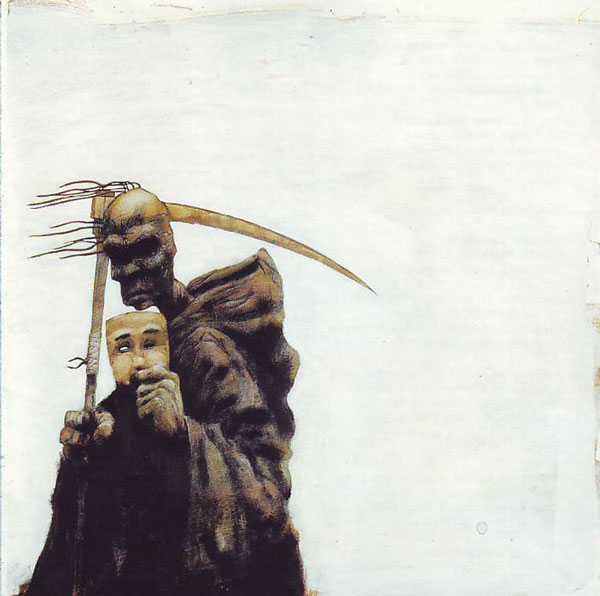 This is some heavy stuff! If crunchy swirling Hammond B3 at full volume through Leslie speakers — accompanied only by bass and drums — is something that might interest you, then listen up. Death Organ is a new band from Sweden, a five piece of drums, bass, organ, vocals and vocals (more on the vocals... ahem... later). Per Wiberg plays his Hammond with demonic vengeance, like the world's about to end after the last song of the show. I'm reminded of those good old days, Hush era Deep Purple, Atomic Rooster, the early Nice... yes, those heady days before rock music was spoiled by synthesizers (well, let's make believe it was..). Believe me, you won't even miss the guitar! The band has two lead vocalists, Joachim Sjostrom and Patrik Schultz — one sings a powerful and very appropriate hard-rock style, while the other sounds like the devil himself! The two trade off during the vocal sections, and also with the other members — which works well, recalling Faith No More, though the death-metal vocals are way out of place here, an anachronism that can be a little irritating at times, but more often I have trouble keeping a straight face while listening to this guy. Ultimately one learns to ignore, appreciate, or just accept them. Like my good friend Ken said: it sounds a little like Cookie Monster trying to sing "Karn-Evil 9." Regardless, I think it's a good album — granted it may not be for everyone; the music itself is powerful enough to overcome any problems in the vocal department. After a few listens you might just end up liking it!

Ergo Sum - Mexico – Ergo Sum was an early French progressive band, a six-piece featuring flute and violin, as well as the standard guitars, bass, drums and keyboards, plus a vocalist (Lionel Ledissez) who sounds...  (1994) » Read more