Music has lost one of the true originals of popular culture, a man whose career is unmatched in breadth and influence. David Bowie has died, just days after his 69th birthday and the release of one of the landmark albums of his life – and not just because it was the last. He had been privately battling cancer for 18 months, and passed away on 10 January, 2016. 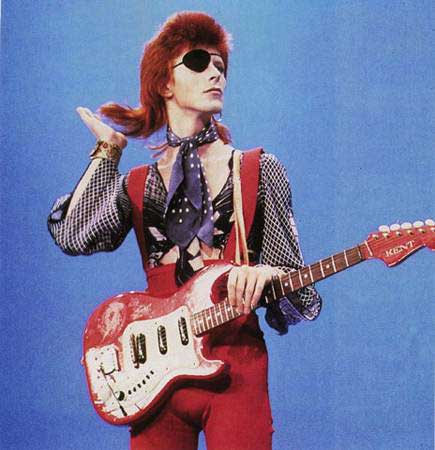 David Robert Jones was born 8 January, 1947 in Brixton, and his journey in music started in the mid-60s with blues, folk, and soul music, but by the end of the decade had moved into psychededlic rock. Throughout the 70s and beyond, his awareness of new ideas at the fringes of popular music, and his ability to integrate them into widely accessible albums, set him apart from other artists.

Given his stature, it seems foolish to try to sum up his astounding body of work, so I'll just link to the excellent BBC items below. I'll just observe that no artist could ask to finish his time on Earth in a better way than Blackstar. It shows a man still creative and vital at an age where most musicians are coasting on their laurels and living off their back catalog. In retrospect, it's even more astounding learning that his health was so grave during its production.

From Space Oddity to Ziggy Stardust to "Heroes" to Earthling, the landmarks are many, and there's not a single one of his studio albums that is without some interest, even for the most esotericly oriented of listeners.

Of course , tributes and remembrances have been coming in from around the world. A number of musical luminaries from the prog world have been collected together by Prog magazine.