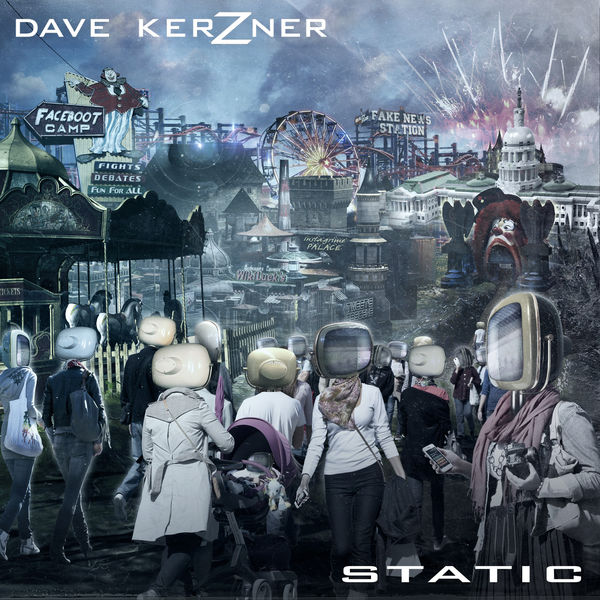 I didn’t know what to expect when I first popped this CD into my player. Dave Kerzner's bio lists work with Keith Emerson, Steve Hackett, Steven Wilson, Alan Parsons, Ringo Starr, and many others, a list diverse enough to provide no clue what his solo work would sound like. As the music played, the connection with Steve Hackett’s recent work was most apparent — Kerzner played keys on Genesis Revisited II — which also relates to work with Kevin Gilbert in Giraffe, with their Genesis tribute work. But far from being reminiscent of Genesis, Static is more like Porcupine Tree crossed with a recent Hackett solo album. The stylistic diversity is not as broad as The Night Siren, and it’s lacking the heavier sounds of Porcupine Tree, but has a similar melodic slant. This is the kind of music that is not precisely progressive rock, but isn’t really not progressive rock. Its ancestors would be along the lines of Kansas, Asia, and the Alan Parsons Project, not so much Gentle Giant or King Crimson. That being said, the music on Static is impeccably written, played, and produced. Kerzner has a pleasant voice, and there are tons of beautiful backing parts to support the lead parts; the lyrics are good, with a propensity towards social commentary. His keyboard work is solid, though he doesn’t often step up for a flashy solo — most of those go to the guitar players, Randy McStine and Fernando Perdomo, with Steve Hackett on one track. The rhythm section varies from track to track, and guests contribute cello and backing vocals here and there. Static is by no means breaking new ground, but on the established ground it can stand proudly on its own merits. I’d certainly rather listen to Kerzner than anything I’ve heard from Asia in decades. Or ever, come to think of it.