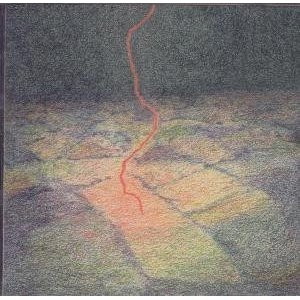 From Omaha, Nebraska, Darling is Hal Darling on drums, piano, keyboards, and sequencing, and sibling Bryce Darling on ancillary percussion and keyboards. No vocals, sorry! No guitars either, but you won't have time to miss them — this is fast-paced and busy music full of contorted twists and turns, riddled with stark unpredictabilities. One would have to say the music here is at least as much avant-garde as it is rock, with wholesale changes at every other measure, often growing from skeletal drum frameworks for piano into grandiose and lavish synth passages in fractions of a second; It's good to hear folks putting so much effort into using real drums and percussion; the jagged and unusual metrics and dense twisted counterrhythms go far to make this something way above and beyond the usual fare. At times, the keyboards are almost incidental, carrying melodic threads in and through the complex percussive framework; at other times the drums seem to be fighting for life within the dense and dark chords of a brutal nightmare put to music. Every second of this disc is fully energized, sometimes it's almost more than one can take in one sitting. Listen to five, take fifteen and then come back for the rest. At any rate, this is definitely one worth seeking out, especially for the adventurous listener.

Frogg Café - The Safenzee Diaries – First things first. This is one of the absolute best sounding live albums this writer has heard, made even more surprising because nearly every track across the 2CD set was recorded at a different...  (2008) » Read more