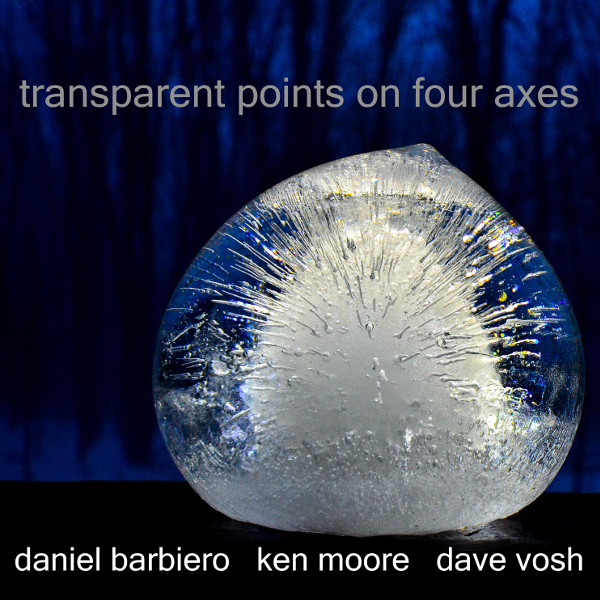 My previous encounters with Daniel Barbiero’s music have been his collaborations with Christiano Bocci, which are highly abstract soundscapes built up from many sources, usually involving Barbiero on a double-bass. His collaborators on this outing are two musicians I am unfamiliar with. Ken Moore has a recorded career going back to the early 80s, and he seems to have created music in a wide variety of styles, from Christian rock to experimental percussion and electronics. Dave Vosh is a modular synthesizer guy favoring kinds of electronic music that don’t involve sequencers, beats, and melodies. A couple of these tracks have titles which presumably commemorate their methods of creation: “For Tape and Emacs” and “Gongs and Flower Pots.” Others have been given names that are either descriptive (“Dark Bell Drone”) or metaphorical (“Cobalt on Maroon over Grey”). Anyway, this music tends to float along with relatively sparse sounds, sometimes (apparently) purely electronic, sometimes involving Barbiero’s bass or Moore’s percussion. Swooping oscillators, echoing blips, odd rhythmic sounds, and strange overtones mingle with sounds from the bass which are not always produced in conventional ways. The contrast between the purely electronic sounds and the undeniably physical sounds from the bass provides one of the key points of interest. A bow scraping across strings, almost producing a clean note, is a very different sound than an oscillator’s resonance filter being adjusted — the complexity of the bass’s wave form is on an entirely different level. The occasional percussive sounds, be they gongs or whatever, also provide elements of contrast. All in all, for abstract soundscape art, I find Transparent Points on Four Axes to be an intriguing listen, full of fascinating textures and juxtapositions.